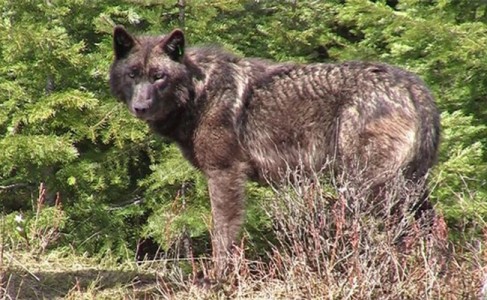 After my week long wolf hunt between Stanley and Salmon in December 2011, I was discussing with Scott Rockholm (founder of Save Western Wildlife) some wolf patterns I noticed on my hunt. Scott suggested I write a document to share with others in pursuit of a wolf.

On the hunt I used a predator caller called a “Mighty Atom 21” made by a company called Wildlife Technologies. I chose this particular caller because of its wolf howls, ungulate distress sounds, and extra large speaker.

On this short trip I called in one lone wolf and a pack of about 8. We did not harvest any wolves due to human error and lack of experience hunting and calling wolves. Now having hindsight, the next trip will be more fruitful and hopefully this advice will benefit other hunters.

1) The wolves came into us at 11:00am both times. We could not call them to us in the early morning hours nor evening hours. Scott confirmed that he and others would see wolves between 10:00am and 2:00pm. I think the wolves move more during day hours and hunt ungulates while in their beds.

2) The wolves came in after various calling sessions of birds sounds and ungulate distress sounds. They NEVER came into us when we used wolf howls.

4) The wolves ALWAYS came from higher ground. They would come from the ridge tops always. If possible, hunt up high on the ridge tops. You can put the caller in the bottom of a canyon and have two hunters on each side on the ridge tops. Be aware of the location of each hunter across canyon from you for safety reasons. If using this set up wear an orange hat. I think wolves prefer to hunt from the ridges and hunt down when available.

5) Don’t make the mistake of hunting wolves the same way you would a coyote. They are a 100 times more intelligent. When the wolves approached the caller they would not stay still for very long if at all. If you have a standing still shot at a wolf don’t hesitate for even one second, always take the shot. Waiting to see if the whole pack will run right into the caller so you can take more than one wolf is foolish. I would propose they rarely will come as a whole pack right to the caller. They will not always act as coyotes! Be prepared to shoot them while they are running. Don’t hesitate to shoot through light brush.

6) The wolves will bust your set up in three main ways. The first way is through sight. If they see you moving, game over. If they have a straight line of sight to your caller and see no animal, game over. Be very careful where you choose to hide your caller. Hide it where the wolves will not be able to have a direct line of sight without you being able to shoot in that area. The second way is through smell. If they circle downwind of you and smell you, game over. Always be aware of your downwind side and watch it closely for circling wolves. The final way is through sound. If you can hike into where the wolves are instead of using a snow machine or four wheeler you will be better off. If they hear you coming even in your truck they run to the top of the ridge and will watch you or listen to you and will not come into your calling.

7) We found a cow elk the wolves killed. We also were able to identify wolf beds in the snow where the wolves laid down by their kill and left blood in their beds. The wolves bedded down 80 to 100 yards from their kill to watch over it. They also had a wolf or two in the pack bed up high above the other wolves and the kill to have an advantage point. Very intelligent. They are stealthy like a mountain lion and will stalk you and absolutely watch you from high vantage points even rocky terrain.

I hope this helps you all in your next wolf hunting trip.