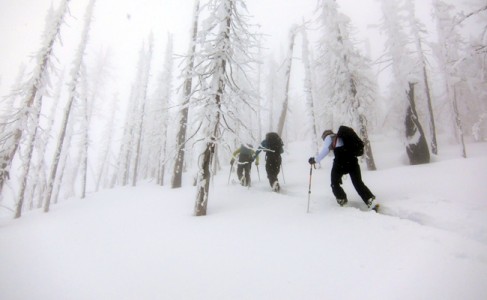 Lower mountain – – good natural and machine snow base.  Soft groomed surfaces.  Upper mountain – – – A few groomed trails otherwise powder. There is 4” of snow at the lower mountain, and 48” at the upper mountain.  26” of new snow with the storm that started on Wednesday morning & it’s still snowing.

We’ve received a few reports of good fishing on the Missouri.  Various colors of San Juan worms have proven to be successful.  Nymphing on the upper section is productive.  Try pink scuds & sow bugs with some sort of midge larva and you should be successful. This colder weather has stabilized the existing ice.  Fishing near the silos has continued to be some what productive for Rainbow.  Try black or purple jig flies tipped with maggots. Fishing about 8-10” in about 12-15” of water seems to be productive.  Anglers have reported about 10” of ice at the silos.  Some anglers have managed to cross the pressure ridges to head north for perch.  Some success has been had using Hali spoons tipped with maggots.   Use extreme caution if you decide to cross the pressure ridges.  Mark your calendars & gear up – – January 28 & 29 is the Broadwater Lions Perch Derby at Canyon Ferry Lake.

Open water fishing is reported to be good from either boat or shore.  Very good rainbow action from boat anglers has been reported.  A few walleyes have been caught also. You might want to try a marabou jig.

Ling fishing below the dam has been very good, after dark & use sucker meat or smelt.  Reports of rainbow and an occasional walleye jigging slowly in deeper water below the dams have produced some nice rainbow and a few walleye.

Reports are the ice is pretty good here, but the fishing is very slow. A few large kokanee salmon have been pulled out of the reservoir this week.  Try Blue & silver, some have reported luck with these colors.