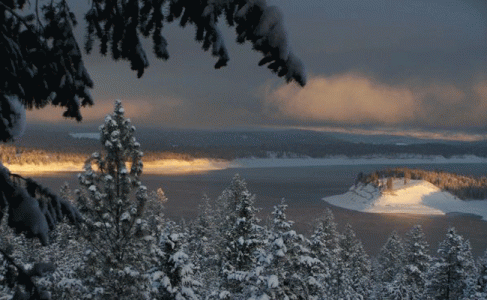 Captain’s Column: February, A Great Month For Fishing
By Kjel

It may not seem like it if you are not one of the few anglers that ice fish or open water fish on Montana’s rivers and lakes, but now is a good time to try your luck. Whether you still have the urge to drill a hole through the ice or venture out in open water in a boat or fish off a river bank there is place for you to head out in the great Montana outdoors.

February and March are excellent months to target big lake trout. The bigger fish, 30 to 40 inches are out on the large flats in 120 to 200 feet of water reports Bob Orsua from Mo Fisch Charters. Orsua recommends fishing 120 feet deep off of Angle point or 180 feet deep off of Painted Rocks. Last week Orsua pulled 7 big lake trout in the boat with the largest laker weighing in at 19 pounds and 39 inches long. They also caught one lake trout 37 inches, two fish in the slot and four fish just under the slot limit. “Troll big flat fish on the bottom, try using T-50, T-55, and T-60 flatfish from Worden’s in white belly-red top, white with red head, watermelon, and fire tiger,” added Orsua, “and it is usually a morning bite so the earlier the better”. One final tip-Remember the flatfish has to be bouncing along the bottom for these fish to hit it. A very erratic mud trenching presentation is what it takes. Look for calm days because fighting the wind and trying to go slow is a lot harder to do.

“Last week when I was fishing the Thompson River I saw a fish rise, “said Scott Anderson from the Montana Fishing Company. Fishing however was slow for Anderson and he reports that the water temperature was cold. “I have heard that skwala stone fly is on the move on the Bitterroot River,” he said. Anderson plans on fishing the “Root” this week.

Mike Violette of Missoula sent a picture that we posted of a real fat walleye he caught through the ice this past week on www.montanaoutdoor.com Violette who loves to ice fish declined to reveal the lake that he caught the walleye on but he did say it was fattest walleye that he had caught to date. By the way he released the fish so you might have a chance to enjoy catching this trophy fish, wherever that lake might be in Montana.  Also through the ice Sharon of Silos Rv says the perch fishing on Canyon Ferry is picking up. “The trout fishing is also good”, she said. The ice is 12 to 15 inches thick, but she reminds anglers to be careful around the pressure ridges.

Georgetown Lake has been ice fishing well reports Bill Brown from Bob Wards. “The steelhead fishing in Idaho has started to pick up lately with more water in the Clearwater River”, said Brown.

Remember next Thursday March 1 you will need a new 2012 Montana Fishing license to fish Montana.