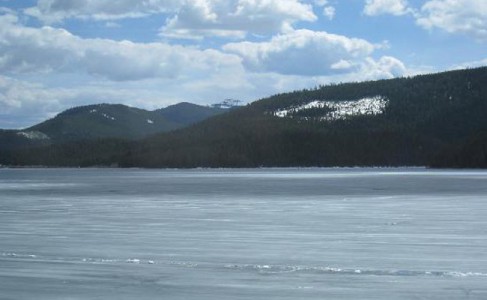 Ice fishing this past week has seen the catching part become hit and miss but the nice weather has made it very pleasant on the ice. In fact the warmer weather has made ice conditions on some lakes not safe to go out on. Scott Anderson from Thompson Falls went ice fishing for northern pike for the first time and ended up pulling a 9 pound pike through the ice. Anderson who owns and guides for Montana Fishing Company normally is fishing with a fly rod and a fly for trout. Last week however on a frozen Noxon Reservoir Anderson decided to try his luck for pike through the ice. “The day started out slow on Noxon, but picked up around 11am as the anglers fishing around me started to catch quite a few pike in the20-24 inch range,” added Anderson, “Then all of a sudden my flag on my tip-up went up around 2:30pm, I ran across the ice and yanked on my line and it yanked back, it took about 3 minutes to get my first northern pike on the ice”. The excitement of catching and eating the pike might have started a new target fish for his future clients. “We will start to do fly fishing for pike as soon as we can float the Clark Fork”, said Anderson. For more information call Anderson at 406-210-0971. You may view a picture of his pike on www.montanaoutdoor.com

Ice fishing has been good up in Northwest Montana. Ice is holding up pretty good for perch fishing on Murphy’s Lake with some decent pike as well reports Chancy from Snappys in Kalispell. On Lake Mary Ronan on the south-end near Camp Tuffit anglers have been catching perch. Bitterroot Lake has been slow for kokanee salmon but folks are still ice fishing with 5-7 inches on the south end.

Ice conditions can certainly change fast just ask Jay Hansen of the Montana Sporting Journal. He posted a story on www.montanaoutdoor.com about a recent trip to a remote area on Fort Peck Reservoir for a day of ice fishing with his dad and a friend. They arrived at the frozen lake by dawn. By mid-day they had strong chinook winds from west blowing warm air that felt to Hansen like a furnace. The warm winds quickly turned what was solid ice into a inch of water on top of the ice. At times Hansen wrote they even had waves on top of the ice. Before long the ice near the shore started to deteriorate right before their eyes. They made it off the ice safely but it serves as a reminder that anglers should definitely use caution when ice fishing, especially this time of the year.

In the Helena area the Missouri has been a bit dicey this past week due to the varied temperature fluctuations. Angie at Bob Wards in Helena recommends to look for open water between the reservoirs. She says stick with a glass bead pale morning dun nymph, or a mighty mo or soft hackle in pink and try sizes 14-16. For streamer action dip a size 2 white fathead or black home invader into the lanes for best success.