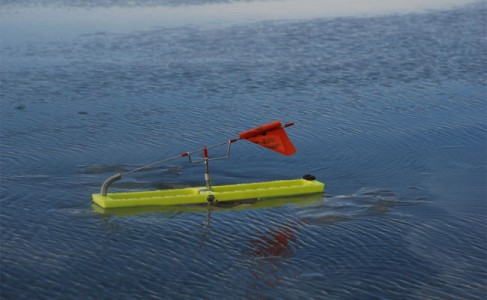 There are certain times when a high-risk plan pays off with a high-reward. Like killing a big bull elk miles from the nearest road or catching your biggest trout in a remote mountain lake, sometimes hard work pays off.  On this one day ice-fishing trip, we didn’t make it easy on ourselves. Dad, Scott and I were determined to try a remote access point on Fort Peck Reservoir. It is always nice having acres of the reservoir to yourself. We were betting on good ice in this fairly protected section of the lake and with the lack of snow this winter, the long, lonely road should be in good shape.

We left town at 5AM and were on schedule when we arrived within sight of the lake at dawn. We played it safe and left the truck on top of the final rise, before a steep drop to the water’s edge. The ice was adequate; it varied from six to ten inches. There were some pressure ridges that were pushing water on the ice, but none that we had to cross.  As far as ice-fishing goes, the day was beautiful. Our holes did not freeze over and Scott pointed out that despite it being the end of January, none of us needed gloves. Elk steaks at lunch completed our sense of peace in beautiful country.  But, things changed quickly. The strong chinook winds from the west blew warm air that felt like a furnace. By the time we finished our midday meal, there was an inch of water on top of the ice. At times, we even had waves on the top of the ice. When we saw the ice near shore deteriorating before our eyes, we decided to pull up the lines and get the four-wheeler back to high ground.

The dry roads we had been impressed with on the drive in, had turned ugly. Frost in the gumbo had been released, turning the top layer into slime. The four-wheeler had all it could do, pulling our sleds uphill, pushing mud in front of it. When we made it to the truck, Scott stayed on the Polaris, making sure the road back out was fit for a vehicle pulling a trailer. We made it out to the main gravel road and all breathed a sense of relief. 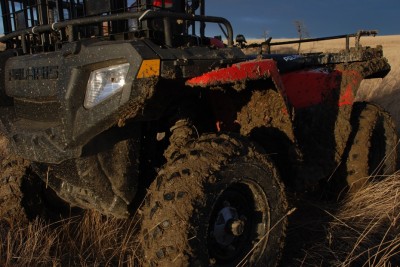 If Fort Peck had rewarded us with a mess of walleyes or a monster pike, it would all have been a minor hassle. But, the fishing was less than spectacular with only a few, small fish to show for our efforts. But, we did have it to ourselves.