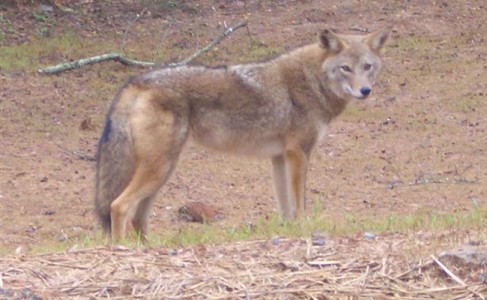 For the sportsman, there might not be a more readily-available resource in Montana than coyotes and coyote hunting. The wiley predator can be found in every corner of the state and at nearly every elevation. I have seen them on flats of the eastern prairie and at 10,000 feet above sea level in the Beartooth Mountains. Coyotes have learned to survive on a variety of foods from mice and sunflowers to big game such as mule deer. They are a crafty creature and are very plentiful , so if you want some sporty hunting, don’t wait another season.

This recent hunt was long overdue. I was itching to get out after nearly 2/3 of winter had already passed, with hardly a lick of snow. So, when this February snow finally arrived, I had to get out and do some calling in the rolling hills of central Montana. While snow isn’t necessary to bring in a coyote or two, it sure seems to help. And it is nice to see their tracks in the snow, giving you a sign that they have been around.

Wind is more of a factor than snow and I had about an hour of calm, before the wind picked up. However, it was enough time to bring in a pair of coyotes to about 400 yards, but either they winded my scent from my walk or saw something they didn’t like. I could have shot as they veered off, but I figured they didn’t need any more educating, as these hardy creatures are smart enough already. After all, they are the true survivors.

This posted was provided by Jay Hanson, the Editor of the Montana Sporting Journal.  Contact Jay by phone at 1-800-559-4351 or visit their website at www.montanasportingjournal.com