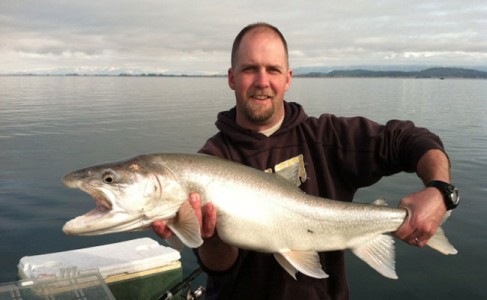 The lake trout fishing in Flathead Lake was great for the second weekend of 2012 Spring Mack Days- thanks to all of the participating anglers.  The weekend entries came to 3,088 bringing the total to 6,088.  Mack Days are sponsored by the Confederated Salish and Kootenai Tribes and sanctioned by Montana Fish, Wildlife, and Parks. Up to $150,000 in Cash and Prizes is available in the Spring Event.

Two lucky anglers-Matt Gukenberg-Kalispell and youth angler Connor Kowalski-Florence-turned in $500 tagged lake trout during the second weekend. Two other anglers were lucky with $200 tagged lake trout-Greg Grenwell-Missoula and Brett Thompson-Charlo.  Winning $100 for tagged lake trout were-Mike Benson x 2, Mark Lang-Kalispell, Charlie Miller-Missoula x 2, Blaine Koistinen-Hot Springs, Jens Gran-Polson, Bear Malatare-Arlee, Connor Kowalski, Paul Hobos-Kalispell, Travis Banyai-Kalispell, and Willie Murry-Columbia Falls. Anticipation for one of the higher valued tags to come in increases every day.  Who will it be??  Each angler is hoping to be the one to bring one in.  There is one tag valued at $10,000, 5-$5,000, and 10-$1,000 plus over 4,000 from $100-$500.

Connor Kowalski has 71 total in the 13-17 category followed by Tanner Murry-Columbia Falls with 51, Brady Weible-Charlo-12, Keegan Noyd-Missoula-11, and Wyatt Jenson-Polson-7.

Mack Days continues until May 20th Fridays, Saturdays, and Sundays.  May 11th-20th will be ten straight days of fishing bringing the total days to 34.  Top ten anglers are limited to their best 18 day average and tickets for their best 18 days.  One ticket gets you entered in the lottery drawing that starts at $1,000 and goes to $200.

We remind anglers to always think safety first-be aware of weather and weather advisories, have and wear personal floatation vests-jackets, follow all fishing regulations, keep cell phones dry and in a zip lock plastic bag, let someone know when you plan to return, know your fish ID.  It is illegal to catch or harvest bull trout and westslope cutthroat trout  are catch and release only in Flathead Lake.