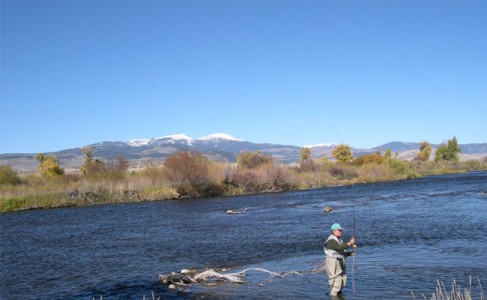 Spring has arrived! That means fishing on the rivers and the lakes is only going to get better. The ice is off Holter Reservoir according to Paul at the Canyon Store in Wolf Creek. Now is the time to head on over and try your luck on the trout by either fishing from shore or trolling in a boat. First ice off usually means good trout fishing on all the reservoirs over in the Helena area as well. It won’t be long before the trout head close to shore and start to spawn. That is always a great time as you can see hundreds of nice size trout cruising just off the shoreline. The boat ramps on both the campgrounds normally are home to a lot of the spawning activity.

The Missouri River below Holter Reservoir has been a hot spot for fly fisherman this month. Some of the best fly fishing in the state right now is on the Missouri River. Fly fishers are using a wide array of different techniques to catch fish. “I know many are using small black stone-fly patterns- imitations of the winter stone or capnia,” added John Perry from John Perry Flyfishing, “they are also using a variety of midge patterns-one of the most popular is the griffith’s gnat size 18 and 20”. Some guys are even using a size 14 griffith’s gnat with a size 20 dropped off of it. But Perry tells me that the most productive way to fish the Missouri right now is with nymphs. “Maybe start the day off with about 6 feet from the indicator to the first fly, then tie a dropper nymph off of that about 18 inches, depending on the current in the river you might want to add or subtract BB’s ”, he said. Perry also had some advice on how to fish the river. “ As the day warms up maybe after a late lunch I would recommend fishing shallower water and move the top fly 3 feet from the indicator-second fly still about 18 inches from the top fly”.  As far as colors goes, sometimes any color under the sun will work,but pinks, reds, peacock, black and whites and purple having been working the best for Perry. For more information or to schedule a trip on a river log onto johnperryflyfishing.com or call 406-370-9183.

Fishing isn’t the only activity that spring brings on. It is also banquet time for many worthwhile wild game conservation groups including the Hellgate Hunters and Anglers in Missoula. Saturday March 24 at 6pm they hold a Wild Night For Wildlife in the Karl Tyler Chevrolet showroom on North Reserve. “We hold this event every year and have a lot of fun with raffles and wild game appetizers,” said Land Tawney, spokesman for the non- profit group. The money raised from the banquet helps the organization fund some worthwhile local projects. Tickets are only $20 for single and $35 for a family. They can be purchased on line at www.montanaoutdoor.com or you may call Mackenzie Dixon at 406-241-5009. Last year over 350 folks attended and as last year with the purchase of a ticket to the event you also receive a year membership to the organization.