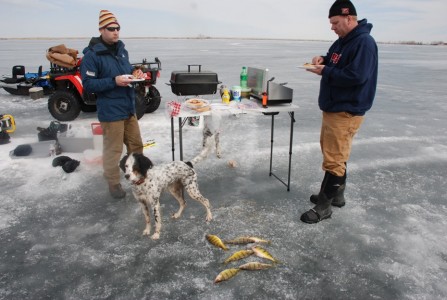 When you leave town with your truck full of tip-ups, a Jiffy Auger and a bucket of minnows while people are raking their lawns and hitting golf balls, you question the quality of the ice you will be seeking. But, you can’t catch fish from your garage, so you have to go.

Fortunately, the climate varies greatly from the Canadian border to where I reside.  While Fergus county area ponds and reservoirs were losing their ice to 60-degree chinook winds, lakes on the Hi-Line were still holding up fairly well.  In fact, I had planned on walking out on the reservoir, pulling out my gear in my Otter sled. But, with a solid 14” of ice, we were able to travel by four-wheeler.

Fishing in March provides an opporunity to possibly catch a behemoth walleye, full of eggs on her way to the spawning grounds. However, we were fishing deeper structure, mostly perch habitat.  In fact, the only three walleyes we caught were males.

The weather was probably the highlight; fishing in the March sun, with no wind, is a great cure for cabin fever. Don’t tell my dermatologist, but I almost look forward to the first sunburn of the spring, especially if that occurs while fishing on the ice, grilling bratwurst.  As I write this three days later, the ice if vanishing from larger reservoirs such as Petrolia and Fort Peck.  The next sunburn will most likely occur while in a boat.