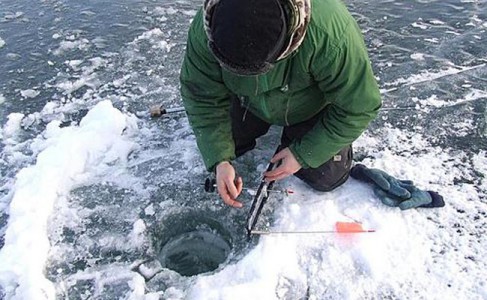 In the Northwest Montana Fishing Report, Chancy, from Snappy’s in Kalispell, reports Flathead Lake has had some nice weather. Bitterroot Lake still has ice, and Kokannee’s been good in the North and South ends 10-12 inch range, but beware the Springs and Pockets at the South end.

Flathead River looks good at Sportsman’s Bridge Access by Big Fork (seen in the picture above), for Macks and Lake Superior White Fish.

Be sure to check the regulations for the areas you’re visiting. Flathead lake folks have been putting in at West Shore State Park trolling and gigging down by Painted Rocks.

In the North Central Montana Fishing Report, Leonard tells us the only real ice is at South Bootlegger on Tiber. With reports of a few Walleyes and Northerns, but there’s open water towards the middle so be safe.

At the Gates of the Mountains, on Holter, folks are putting in boats and having some success on the Walleyes right at the mouth.  Also, just about at Cottonwood looks good for perch and walleye. If you have any questions for Leonard give him a call at (406)454-1877