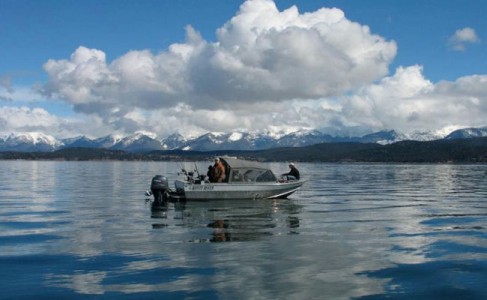 The 2012 fourth weekend total of 12,143 was turned in by 233 anglers in what will be a thirty four day Mack Days Event.  That is 302 more fish than in 2010, where 315 anglers turned in 11,845, by the fourth weekend. The highest number of lake trout entered in a Mack Days Event was 34,350 in the 2010 Spring Fishing Event which was thirty three days long. That number could be surpassed in the 2012 Fishing Event currently in progress!

Mack Days are sponsored by the Confederated Salish and Kootenai Tribes and sanctioned by Montana Fish, Wildlife, and Parks. The fishing events are used to slowly reduce numbers of non-native lake trout in Flathead Lake. Up to $150,000 in cash and prizes will be awarded to anglers at the end of the event.

Prizes are awarded in a lottery style drawing so all it takes is one ticket to win one of the fifty cash prizes from $1,000-$100. There are over 4,000 tagged fish with values from $10,000-$100. Ladies, Youth, Over 70, Captains Prizes, Top Ten Angler Prizes are just some of the categories. Anglers also receive bonus amounts depending on the total number of lake trout entries over 20 that they have. For more information go to www.mackdays.com or telephone 406-883-2888 ex.7294.

Currently leading in numbers is Mike Benson of Lonepine with 478, 2nd-Don Beville-Lakeside-413, 3rd-Steven Benson-Four Lakes, Wa., 4th-Craig Morigeau-Polson-381, 5th-Scott Bombard-Missoula-370, 6th-Jason Mahlen-Kalispell-349, 7th-Danny Smith-Hot Springs-324, 8th-David McDaniel-Polson-321 & Chuck Forgey-Arlee-321, and 10th-Jerry Benson-Plains-300. The top ten anglers are placed by their best eighteen day average at the end of the event. Anglers are also limited in tickets by their best eighteen days but the bonus amounts do continue to go up according to numbers of entries. Craig Morigeau had the high number on Friday with 72 entries. He was followed by Mike Benson with 69 and Don Beville with 64. Saturday it was Morigeau again with a high of 53 followed by Beville with 40 and Tyson Atkinson of Charlo with 38. Sunday was a beautiful day but several boats reported four foot rollers out on the water. Steve Benson turned in the high of 35 followed by Mike Benson with 33 and Jason North of Stevensville with 30.

The fishing reports are that the lake trout are deep-220-260 feet. The use of a map that shows the depths and contours of the lake or a good fish finder is essential. The lake trout seem to be concentrated on steep drop-off areas and off of the steep points. Some anglers report that following the contours where the depths go down but not too steep also produces some lake trout. Once you find them and get anchored over them-use heavier type jigs-baited with cut bait-go to the bottom and jig up off the bottom or cast out and jig back towards the boat. Change bait often-don’t let it get too water logged. If one color doesn’t work try a different one. Glow colors seem to give a bit of an edge. With the warmer weather moving in this may change. Remember to keep your fish on ice if you are going to donate them to go to the food banks. They cannot be accepted for donation if they are not on ice. The use of a live well does not keep the temperature low enough. Ice needs to be added to it.

Entries are taken until the last day of the event. There is no charge to enter this event. One fish is all it takes to win!!