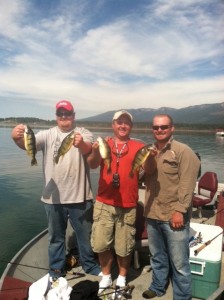 Flathead Lake Perch Report From the Captain
By Kjel

We knew it was going to be a warm day on Monday so we headed out to Flathead Lake to try and catch some perch. Reports over the weekend were mixed from east Polson Bay. What we heard was their were about 50 boats on Saturday and Sunday with some of the boats catching nice sized perch and other boats not having very good luck, especially if they fishing in the afternoon. The water temperature now is in the 56-57 degree range and there is speculation that the perch bite might be winding down. Arlyn Lemer from Lolo, Don Beardsley from Missoula, and I arrived at the boat ramp by the Kwa Tuk Nuk  in Polson about 10am and were surprised to find the parking lot already full of boat trailers. It was Monday! Doesn’t anybody work anymore? The perch fishing for us was very slow with only a number of small males caught. There were about 30 boats fishing and all of them were having limited success.
Chancy from Snappys and his buddies from Kalispell were one of the boats that did manage to catch some nice size perch. Chancy said that they caught 6 perch the size of the ones in the picture.
Captain