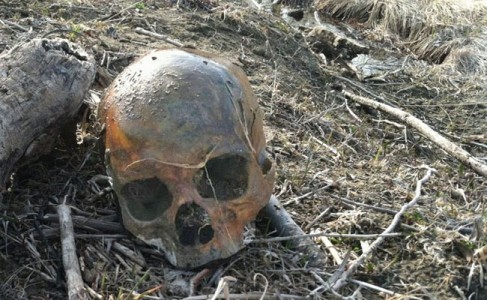 When a Fish, Wildlife and Parks Fish Survey crew went electro-shocking fish on the Musselshell River on Monday, they were the ones who received a shock.

The two-man crew, aided by two Billings volunteers, found a human skull poking out of the shallow water along the south bank. Worried that someone else might pick it up, they GPSed the location and marked it, then lifted the skull out of its gravelly grave. They passed it on to a warden who gave it to the Wheatland County Sheriff.

By Tuesday, the Montana State Crime Lab had identified the skull as an American Indian, likely unearthed during last year’s high water and sent tumbling down the river.

Here’s a link to the full story on BillingsGazette.com

Be sure to tune in tomorrow morning for the Montana Outdoor Radio Show. The Captain will be broadcasting Live from the Cottonwood Inn from 6:00-8:00 a.m. at the Glasgow/Fort Peck Walleye Unlimited Event Day and Banquet.