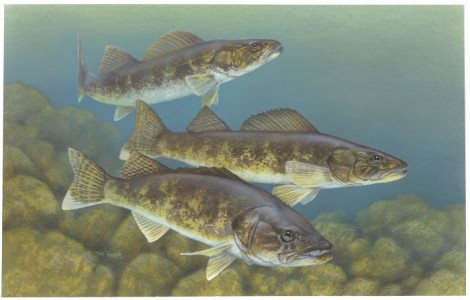 Biologists in the Thompson Falls area have been using various methods to sample walleye in Noxon Reservoir in the lower Clark Fork Drainage in the last two weeks.

Netting areas were designated by orange buoys on the water near the Graves Creek confluence, the Thompson Falls golf course, and Thompson Falls State Park.  Biologists have also been electrofishing at night below Thompson Falls Dam.  These sampling efforts are part of an effort to learn more about the walleye living in the reservoir.

Walleye were first detected in the reservoir in 1991 during fisheries sampling.  These fish are the result of several illegal introductions.  In 2000, standardized annual monitoring was implemented to monitor trends in fish abundance and showed that walleye were naturally reproducing.  Walleye abundance gradually increased between 200 and 2009 but in 2010 and 2011 catch rates increased dramatically.

In this spring’s sampling, a total of 61 walleye were collected for autopsy for food habits, sexual maturity and otolith removal for aging. These walleye mostly ranged from 17 to 22 inches in length, with some smaller and larger fish.  After processing, the fish were given to the Sanders County food bank. Two fish larger than 26 inches will be distributed to wildlife rehabilitators because of public health advisories.

Since the detection of walleye in Noxon Reservoir fisheries managers have had concerns about how this new, nonnative species may affect the fishery.  Walleye are voracious predators capable of efficiently exploiting their prey base.  Based on case histories across the West, when introduced into new waters the highly fertile walleye have the ability to quickly over-populate and reduce prey species, causing populations of forage species such as perch to crash.  Following the loss of forage, the overpopulated walleye often stunt. The addition of a new predator will also have to come at the expense of popular largemouth and smallmouth bass and  pike fisheries.  Predation by walleye could also affect the success of an ongoing multi-million dollar fisheries mitigation program funded by Avista, PPL Montana and government agencies to protect and enhance the threatened bull trout and other native fish such as westslope cutthroat in the lower Clark Fork and Lake Pend O’Reille.

These concerns about walleye led to a life history study completed in 2009.  Among other findings, it was determined that walleye were spawning in a small portion of the reservoir between Flatiron Ridge Fishing Access and Prospect Creek.  This is where biologists were sampling fish. The latest information collected will allow biologists to better understand the walleye population and future management needs.

A possible outcome of these studies may be a future attempt at suppressing walleye in Noxon Reservoir.  In addition to the implications mentioned above, Montana Fish, Wildlife and Parks has a policy that directs biologists and managers to act on illegal fish introductions.  Specifically, the Illegal and Unauthorized Introduction of Aquatic Wildlife Policy states that “If the department determines that removal may be feasible it shall attempt removal at the earliest possible date”.  Additional information is needed before managers can determine management objectives.  If the MFWP determines that suppression is feasible and warranted an environmental assessment will be prepared prior to implementation.  This EA would include public outreach and collection of public comments.