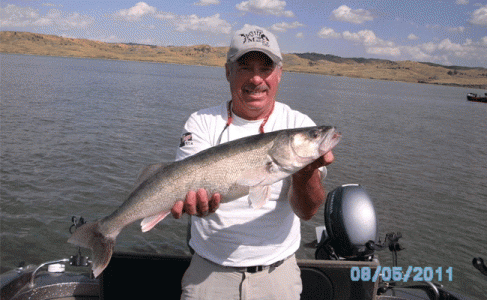 I had the opportunity to try for some spring walleye/sauger last weekend but the fish had other plans. Humbling to say the least. Spring weather, water temperature variations and early run off helped Big Horn Lake live up to it’s reputation of being a difficult body of water to fish.

A couple things to share this week. The first is on live bait rigging. Minnows are often used this time of year and whether you are fishing from shore or in a boat, allowing a lively minnow struggle on the end of your line is a commonly used technique. Something I do that has proved very helpful is to place a small float above the hook and anchor it next to the hook eye using a round toothpick. The pointed end of the toothpick is poked into end of the float opposite the hook which will hold the float in place, then it is broken off. This prevents the float from sliding up the line and most important it will make the minnow struggle more. The more it fights against the float pulling it up, the more vibration signals the minnow gives off and in murky water that’s a good thing.

Secondly; this time of year we have a great opportunity to learn more about the waters or more precisely what is beneath that water. As the reservoirs are drawn down in anticipation of the annual runoff we are afforded a unique chance to learn the structure we fish during the rest of the season. Obviously access to the back areas can be a problem, however when you can get to those areas by boat or from shore make the best of it. I take photos and make mental notes of prominent features and general topography. Another option is using Google Earth to download aerial photos of the now exposed structures.