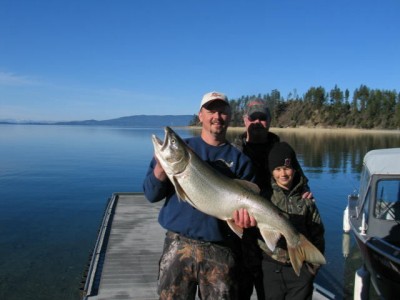 Mack Days anglers turned in 2,952 lake trout entries the 5th weekend of the Spring Fishing Event bringing the total to 15,097.  Fridays total at the end of a beautiful day on the lake was 1,238, Saturday 1,087, and Sunday’s blustery winds hampered anglers with huge rolling waves but still a good total of 627. 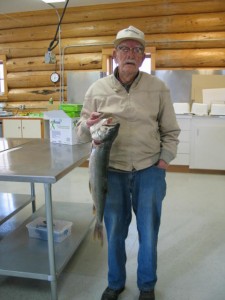 Up to $150,000 in cash and prizes will be awarded to anglers at the conclusion of the event on May 20th.  Each fish gives the anglers a chance at winning cash and merchandise prizes.

Still leading the event is Mike Benson of Lonepine with 583.  Benson turned in 44-Friday, 30-Saturday, and 31 on Sunday.  Coming up with strong numbers in second place is Don Beville of Lakeside with 566.  Beville, turned in 74 on Friday, 34 Saturday, and had to leave early for work reasons Sunday and turned in 45 by 11:00 along with his son Garett who turned in 23.  He reported it was hard to leave because as he tried to reel in the lines the fish were still biting and he had to bring in fish to get the lines in.  Hugh rolling waves were taking a toll on the anglers who were out on the water. Some reported being a little battle worn but not complaining.  Steve Benson-Four Lakes, WA. is third with 478, 4th place is Craig Morigeau of Polson-476 & Scott Bombard-Missoula- with 476, Jason Mahlen-Kalispell-6th 425, Jerry Benson-Plains-7th 402, David McDaniel-Polson-8th with 395, Danny Smith-Hot Springs 9th -394, and Chuck Forgey-Polson-10th 321.

Garett Vaughan leads the 12 & under category with 105.  He is followed by Dylan Hodgson-Kalispell and Danner Shima-Kalispell each with 21.  Connor Kowalski-Florence retained the lead in the 13-17 age group even though he did not fish the weekend.  His total of 148 still stands with Tanner Murry of Kalispell in second with 129, Garrett Beville-Lakeside-3rd with 75, Roger Guillory-Kalispell-37, and Kobe Cox-Charlo-30.

Ryan Shima turned in a 42.5 inch 24.5lb lake trout on Saturday to take the lead in the largest fish entry.  The largest fish has to be over 36” and over 24lbs.  Ryan was fishing with his son Danner and father Mike and was going to move the boat because of no fishing action when the big fish hit. He reported that he thought it was a slot fish and was a little grumpy.  Twenty minutes later they realized how large it was and called it in. Winner of the largest fish category is awarded $500.

There are still a $10,000, five $5,000, ten $1,000 and over 4000 tags with values from $100-$500.  The tagged fish were released throughout the lake and each area had one or more of the higher valued lake trout in it. The higher valued tagged fish were released right before the event began.  Tags have been caught from one end of the lake to the other.  You can see the tagged fish information on the website at www.mackdays.com along with all of the other information about the event or call 406-883-2888 ex. 7294.