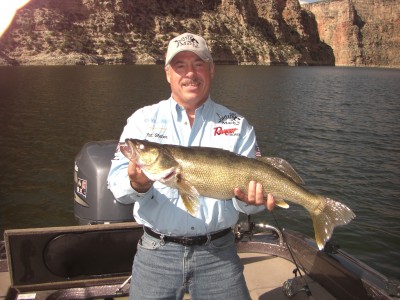 Well, the lake trout are still biting strong on Buffalo Bill Reservoir!  A large male laker was caught recently  (http://www.codyenterprise.com/news/sports/article_b6159976-83fe-11e1-bb49-0019bb2963f4.html) so naturally, I had to give it a shot.

The weather report for Saturday morning didn’t sound very good but we woke to clear blue skies and calm winds; it was time to hook up the Ranger and make the short drive to the launch ramp.  We had fresh bait but planned to spend most of our time trolling. With the west half of the Northfork arm of the reservoir closed to protect trout moving up river to spawn, we headed to the Southfork arm.  As we neared the point that seperates the two incoming rivers we decided to try our hand jigging.

The graph showed some nice archs as we moved into 35 feet so I dropped the trolling motor and brought the 620 up onto the shelf.  It was the third lift and drop of the Mack’s Lure Rock Dancer jig I felt that familar tug but it wasn’t the laker we wanted.  A nice brown trout came to the net.  We jigged two more trout and then our first laker came in and we decided we should head to deeper water.

We set up our trolling rods, lead core on three and one with fireline and a dipsey diver to take the lure further out to the side and down. Starting out in 120 feet, we were heading toward shallower water, eyes glued to the locator.  The fish were showing up from 45 on down but no strikes until we got into the 55 to 60 foot range.  It took some adjustments on the line counters with the first laker coming on a stick bait, blue/silver at 125 feet with the dipsey diver.  That setup accounted for 3 more lakers before the wind chased us off the water.

We didn’t find the toad we hoped for, but being out on the water with snow capped mountain all around brings peace to my spirit.