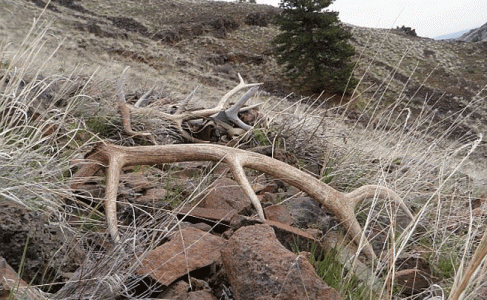 Both deer and elk have been dropping antlers already this year and many have are completely done. I watch the whitetail deer in my neighborhood to help with my timing. There are around 5 bucks that frequent my neighborhood in Missoula. Of those 5 bucks 4 are without horns. I haven’t been out in search of antlers yet but I did pick up 2 elk antlers last weekend while fishing on the Salmon River. 1 was from last year and 1 was from just this spring/winter.

If you are going to get out in search of antlers make sure the area you are going to is open to shed hunting. Several areas in Montana, mainly wildlife preserves, are closed until later in the year to allow peace to the wintering elk.

Some Advice from FWP:

When: Wildlife officials urge antler hunters to wait until mid-May to keep weakened elk and deer from being bothered. Many big game wildlife management areas don’t open until midnight May 15 (noon on the Sun River WMA).

Where: You can find deer or elk sheds where bucks and bulls hung out when they dropped their antlers, which for deer begins in January and for elk begins in March.

Expert antler collectors comb known wintering areas, such as south- or southwest-facing low-elevation slopes and the bottoms of large valleys with little snow. (Elk and deer avoid deep snow, which covers food and causes the animals to burn up energy when walking.)

In early spring, elk and deer slowly move up into forested areas, following the receding snow line and feeding on newly sprouted vegetation. Bulls and bucks lose their antlers along fences, in bedding areas and brushy areas, and while bumping boulders as they lick sand for minerals. The animals feed and bed on south-facing hillsides during the day and move to north-facing woods at night.

How: There aren’t many tricks to antler hunting, which is why even kids can find sheds. Many collectors go to high vantage points and scan the ground with binoculars, looking for telltale tines (which are often not off-white, as you might expect, but brown). Jim Phillips of Three Forks, who has found more than 14,000 sheds since he began searching as a boy in 1958, says his secret is to cover a lot of territory and keep his eyes on the ground. “I’ll walk 12 miles a day looking all over the place,” he says. “I can’t tell you how many times I’ve found antlers where other shed hunters—good shed hunters—have already been.”

Word of warning: Phillips adds that shed hunting can be addictive, and that it can also impede hunting success. “During hunting season, I don’t see many deer anymore,” he says. “I’m always looking down at the ground.””