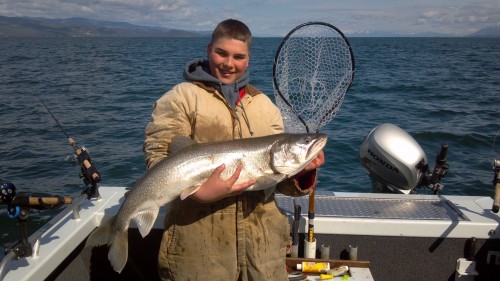 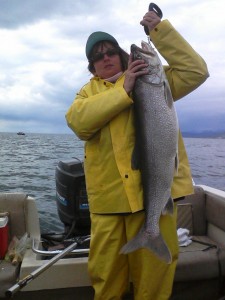 The 2012 Spring Mack Days Fishing Event continues to develop as angler totals continue to grow. Two thousand-eight hundred-ninety-nine lake trout were turned in during the seventh weekend bringing the total for all weekends to twenty one thousand-nine hundred-sixty-three.

Mack Days Events are sponsored by the Confederated Salish and Kootenai Tribes and are used to slowly reduce numbers of non-native lake trout in Flathead Lake. Bull trout and westslope cutthroat trout were once the dominant fish in Flathead Lake and were common throughout the Northwest. Their numbers and their habitat are now very reduced-their population is just a fraction of what was historically. Bull trout are listed as “threatened” under the Endangered Species Act. They are extinct in some areas where they used to be very abundant. Montana is a bull trout stronghold in the United States but the numbers in most streams are depressed from historical numbers. Some bull trout live part of their life in Flathead Lake and travel many miles-some in excess of seventy five miles up into streams to spawn and then return to the lake. Predation from the non native lake trout is one of the reasons for the decline of this native fish. The native fish are important to the Flathead Lake system. They are a part of the natural integrity of the system. 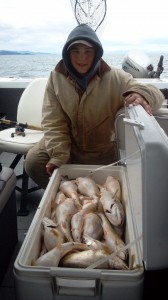 Youth anglers in this event have been turning in lake trout along with the adults. Their total over the seven weeks is 1,020. The 12 & under age group is lead by Garett Vaughan of Charlo with 167- Saturday Garett caught a $500 tagged lake trout and Sunday turned in 31 lake trout which has been his best day of the event for numbers. The 13-17 age group is lead by Connor Kowalski-Florence with 187-32 on Saturday has been Connor’s best day, and following right behind him is Tanner Murry-Columbia Falls with 183. Garett Beville-Lakeside has turned in 113 with 33 a week ago his big day, Kobe Cox of Charlo is fourth with 81 and fifth is Roger Guillory-Kalispell with 62.

There is still a $10,000 tagged lake trout, 5-$5,000, 10-$1,000 and over 4000 with values from $100-$500 in the lake. The tagged fish besides being an incentive are also used for research purposes. More information about the tagged fish can be found on the website at www.mackdays.com. Catching $100 tagged fish the seventh week were-Scott Bombard, Tracy Powers, Ben Knipe-Polson, Troy Gaswint-Frenchtown, Don Beville, Garett Beville, Chad Cottet-Polson, Leo Gialometo-Stevensville, Kevin Guillory-Kalispell, Travis Banyai-Kalispell, Richard Pitkin-Kalispell, Stan Ross-Kalispell, Brandt Hammerncik-Missoula, and David McDaniel. Garett Vaughan was the only angler to turn in a $500 tagged fish the seventh week.

Once an angler has 20 entries they begin to receive bonus amounts depending on their total entries at the end of the event. Bonus amounts are listed on the website.

Mack Days will continue until Sunday May 20th with the conclusion of the event at Blue Bay. A fish fry for the anglers will begin at 4:00 and awards and lottery drawing will begin at 5:00. All fish are to be turned in by 4:00.

Entries are taken until the last day of the event. Enter online or go to the website entry page under events. You can also telephone 406-883-2888 ex. 7294 for information.