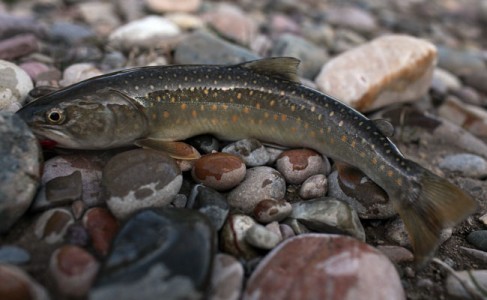 You’ve been reading about the Confederated Salish and Kootenai Tribe, and Trout Unlimited, saying that lake trout are exploding and bull trout are almost extinct and therefore they need to net lake trout. I think just the opposite is true!

Redd counts are the number of spawning beds made by the adult bull trout in the tributaries in the Flathead River drainage. These counts are done by the FWP fish biologists, which began in 1979. Current counts state that the bull trout population is stable. Stable means that the bull trout are not on the brink of extinction. You hear there are only 3,000 adult bull trout in Flathead Lake. If you count all age classes of bull trout there are between 50,000 to 130,000 bull trout in the system. A mid-term review of the Flathead Co-op management Plan said lake trout and bull trout populations are stable/stable. If the biologists can’t agree on the data then how do they come to an agreement on future actions?

There is no evidence (data) that taking out 150,000 lake trout a year, as they propose, will help the native species. There are those that point to Lake Pend’ Oreille as a success, but they are trying to bring back Kokanee salmon, and then bring back the Kamloop rainbow, for a sport fishery. They don’t even have a method of monitoring the native species in Lake Pend Oreille, only how many are killed in the gill nets. Thousands of lake trout were gill netted out of Swan Lake in the past three years and yielded a 50% loss in the latest redd counts in that system.

The biologists cannot answer the question, what is enough? I think Mack days has reduced lake trout numbers dramatically. The lake trout and the native fish have co-existed in the Flathead Lake drainage for over 100 years and the fish are stable/stable. Is the risk of possibly crashing a sport fishery worth the unknown gain? I say no! Proponents of gill netting point to the outcry over the demise of the non-native Kokanee Salmon/bull trout/cutthroat trout fishery in the 80’s. Are we ready to accept a crash in the only sport fishery we have left on Flathead Lake?

We all acknowledge that the mysis shrimp have changed everything in the lake. For this reason, the lake will never return to pre mysis fish populations. The introduction of the mysis was supposed to be a good thing for the non-native Kokanee salmon but it actually crashed them. The lack of knowledge of reducing the lake trout might have the same results. This decision must be decided by good science, not wishful thinking.

The biologists do not know if there will ever be a positive response in the bull trout even if they were able to remove all the lake trout. In fact, they have been quoted to say there might be fewer native species.

Many questions are unanswered; the lake trout are keeping the shrimp population in check, what will happen to the water quality if we create such an imbalance of the fish populations that the shrimp numbers increase? If they gill net the lake, how many Lake Superior Whitefish will also be killed, how many bull trout will be taken in the gill nets, how many other species of fish will be affected by the shifting of balance?

FWP withdrew its support of the environmental review process because they see a need for a complete EIS, for better science, for complete transparency, and for public scoping. The tribe wants to just go ahead and kill 150,000 lake trout a year for the next 5 years and then study the results. The tribe has applied for 3.5 million dollars from BPA for the next 3 years to continue this experiment on the taxpayer’s dollar, from our power bills.

Is this the bridge to nowhere?

Bob Orsua, for the past 10 years has owned and operated a fishing charter business on the west Shore of Flathead Lake.