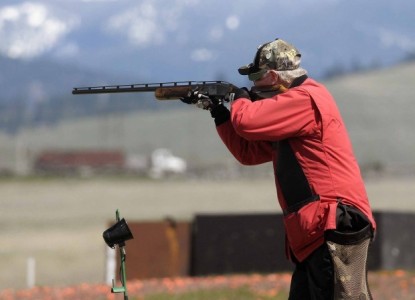 You know that Spring is in full swing when the Ron Hoppie Memorial Trapshooting Tournament returns to Missoula. The Trap and Skeet Club will host the 30th Annual Tournament on Friday, Saturday and Sunday.

The Hoppie is the largest trap tourney in the 7 state northwest, and is the only All-American points qualified non-state tournament in the region.

Trap shooters from all over the U.S. and Canada will compete for over $8000.00 in trophies.

The 1000 target tourney is expected to draw over 300 competitors who will shoot at over 300,000 targets. A pig roast dinner, Pro-Am competition and numerous daily shoot-offs for prizes are just some of the fun that will take place during the 9 event, 3 day competition.

Fishing reports vary from slow to fair around Montana.

River conditions in Western Montana are always affected by the weather this time of the year.

A week ago most of the river’s cubic feet per second came dramatically down due to the colder weather that slowed mountain snow-pack melt. The Bitterroot River for example went from 8000 cfs down to 2200 cfs. Look for Mothers day Caddis, skwala stone flies, march browns and the pink san jaun worm to be effective if the river level remains low.

The best dry fly fishing is on the Missouri River below Holter Dam. This time of the year you will have company but the fly fishing is some of the best that Montana has to offer. Scott Anderson from the Montana Fishing Company recommends pink san juan worms, lighting bugs, sow bugs, and rainbow warriors.

Walleye fishing should start to pick up on the Canyon Ferry and Holter Reservoir if the weather patterns can remain stable for a few days. The walleyes should be hunger as they are now in the post spawn mode. Trevor Johnson of Kits Tackle in a recent post on montanaoutdoor.com says that the magic water temperature is 50 degrees for walleyes to start a shallow water feeding frenzy. This must hold true because a couple of weeks ago when we had a warm spell there were reports of walleyes being caught on Canyon Ferry Reservoir.

Paddlefish season is well underway. As of last weekend, Frank Siroky from Roy reported that 156 paddlefish had been tagged on the upper Missouri River. The quota is 500, so I would recommend that you check the number of fish that have been tagged before heading over to try your luck.

Dick Zimmer from Pablo sent a photo of his catch to montanaoutdoor.com after fishing McWenneger Slough one day last week. The photo shows a nice stringer of perch and a couple of small mouth bass. McWenneger Slough is located east of Kalispell. In the post he also told how he caught the nice stringer of fish. You might want to check it out if you are interested in catching some nice perch.  Click here to see the picture!

And remember Mom this Sunday on her special day.