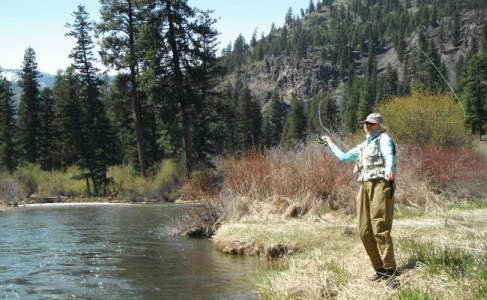 A friend of mine called me the other day and wanted to go fishing. The friend was P.J. Burgess. PJ is a chef and well known through Montana. Her southwestern style of food is to die for. PJ said that she would cook my family dinner and share some of her recipes. I immediately jumped at the offer.

PJ had been following my blog on the Montana Outdoor Radio Show and requested to fish Noxon Reservoir. I know that this was a long shot due to the high water we have had for the past weeks. The Clark Fork has dumped most of Western Montanaʼs runoff into Noxon. With the flood gates open on the dam, I suggested another option. As an outfitter and guide, you have to be quick on your feet to provide the client the best day possible on the water. Sometimes it is best to call off the trip due to mother nature. Being honest and trustworthy is what clients look for in a outfitter.

I suggested that we fish the Thompson River. PJ jumped at the opportunity. She had been seen some of the under water photography that I have done on the Thompson. I told her that the river was a bit off color and that the river was closed at the little Thompson. We were restricted to the 11 mile marker to the 17 mile marker. Because I do not hold permits from the Forest Service on the Thompson, I am not able to guide the lower river for 11 miles until it reaches the Clark Fork River. 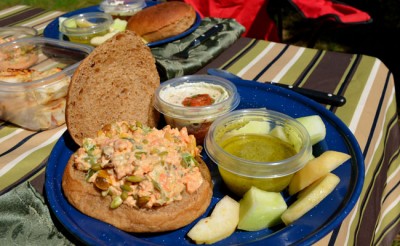 PJ did not raise an eyebrow at the stretch we were going to fish. She knew she was in good hands and any suggestion I gave was fine with her. We started off with lunch that she had prepared. WOW…. that is how I can explain the shore lunch that PJ served. Her home made bread rolls and organic sauces were the best I have ever had. She had made some salsa that was out of this world. For desert we had some type of coconut cookies with a hint of spice that mad it just the right amount of hot on the tip of my tung. The best thing was that we had lunch set up and some anglers were putting their reft in the river and PJ started to serve them appetizers. They loved the food as well.

Well the pressure was on. I had to produce some big fish for PJ. She was a bit rusty on her cast, but after some coaching and kind words her cast just got better! PJ settled in to her fishing. She missed a few on nymphs. I switched her up to my Sweetgrass Bamboo rod with one of my hand tied elk hair caddis. We had a few takes, but could not get the hook set down. We fished for hours with nothing but bugs flying around us with no fish rising. 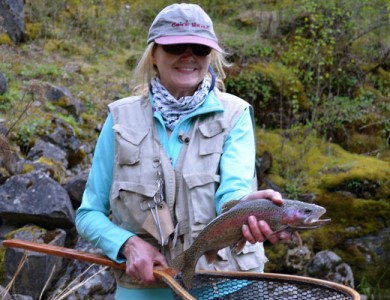 At the end of the day, we stopped in one of my little honey holes that always produced fish. I tied a true skwala pattern on and let PJ cast to some rising fish. Instantly, we had a take just when the fly hit the water. PJ was discouraged because she thought the hook set timing was off. I reassured her that it was not her fault and to put the fly back in the same spot. BANG!!!!! One 18” native male rainbow was on the line. I landed it with my hand made wooden net. PJ was so happy to get a fish and a photo.

 PJ got a few more out of the honey hole. She went back the next day and got a few more with out me. PJ is available to cater fly fishing trips. If you are interested please visit www.montanafishingcompany.com to book your vacation.