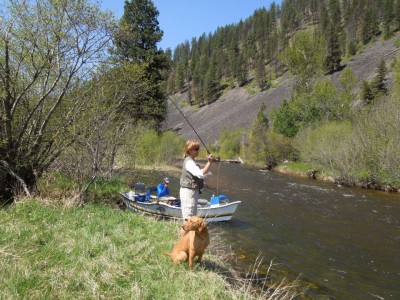 Despite all the rain, most of Western Montana’s Rivers have been on the drop for the past week! That means improving fishing conditions and hungry fish!

The Root has been steadily dropping over the past week and decent conditions should remain until things warm back up. This is a great time of the year to be on the Bitterroot and it should continue to give up fish for the near future. Subsurface is your best bet with the current conditions. San Juan worms in red and pink, prince nymphs, and stone-fly nymphs are getting the job done. If you float the Bitterroot make sure you check conditions prior to going, know where the snags are, and have someone good on the sticks! Every year someone manages to die on the Bitterroot River, so lets try to avoid that this year!

The Blackfoot is still high and off color been has dropped a bunch over the past week. The Blackfoot isn’t close to the best options in the area but that doesn’t mean you couldn’t catch some big fish up there! Your best options are going to be big beaded stone-fly nymphs and San Juan worms. You could also move some nice brown trout by throwing streamers at the bank.

Rock Creek is still the place to be in Western Montana. Salmon flies are in the near future and fish are eagly taking stone fly nymphs during the time being. Here is the report from Rock Creek Mercantile: Despite all the rain we’ve had the past few days, Rock Creek’s cfs has actually gone down instead of up.  That’s mostly due to the overall cold weather, and the creek’s temperature has dropped down a few degrees as well.  Hopefully, with warmer days ahead, the salmon flies will start flying, and that’s when things will get crazy up here.  Until then, it’s the usual crop of nymphs and streamers that work this time of year.” www.rcmerc.com

The Clark Fork should produce some fish, and some nice fish! Things are looking promising and your best options are probably down stream of Missoula near Tarkio. Big nymph rigs or dead drifting streamers  are your best bet.

As the weather stables the MO will be the ticket again. For rising fish this is probably your best bet in the state. That is not to say things will be easy though as your best bet would still be subsurface with caddis larva, worms and even some streamers. If you want to target rising fish you should find some heads rising taking BWO or Midges.