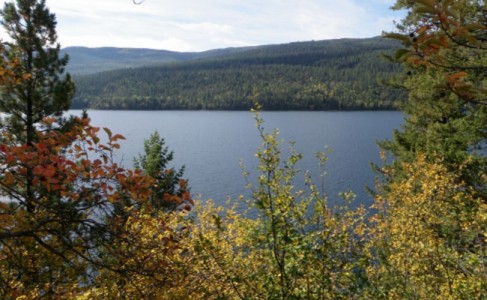 From 2009-2011, a total of 21,330 lake trout from 6-36 inches long were removed from the lake. Lake trout catch per net increased between 2009 and 2010, then decreased in 2011, suggesting that netting efforts were effective at reducing recruitment of young lake trout into the population. Additionally, catch of predominantly newly recruited lake trout in 2010 and 2011 supported the notion that annual netting was effective at reducing abundance of juvenile lake trout.

Bycatch of non-targeted fish species other than lake trout was relatively low throughout the project. However, despite efforts to minimize bycatch mortality (i.e., timing of netting, location of nets, reviving captured fish, etc.), the inadvertent catch and associated mortality of bull trout remains a concern. This concern is compounded by an observed decreasing trend of adult bull trout abundance (reflected by redd counts) in recent years in the Swan drainage.

The declining bull trout trend may be caused by a combination of several factors including gillnetting bycatch, lake trout competition and/or predation, and angler harvest. This trend will be closely monitored in upcoming years.

In the coming month, an environmental assessment (EA) for an extension of this research will be released for public comment. This project, when final, will guide the future management of Swan Lake.