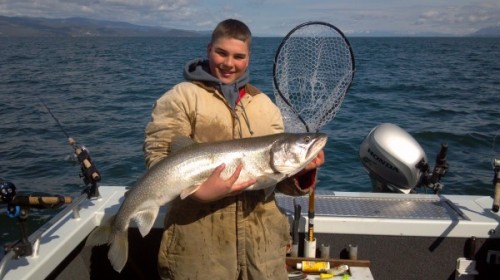 Ten straight days of lake trout fishing are left in the 2012 Spring Mack Days Event. The ten day stretch begins Friday May 11th and ends on May 20th with a finale fish fry and awards at Blue Bay. Up to $150,000 in cash and prizes will be awarded to the hard working anglers at the conclusion of the event. Mack Days are sponsored by the Confederated Salish and Kootenai Tribes and sanctioned by Montana Fish, Wildlife, and Parks. Anglers have completed eight hard fishing weekends of the event. It is not unusual for any of these anglers to put in a 12-14 hour day. The top anglers are competing for placing and so far none are conceding to anyone. Depending on the weather many boats are leaving the docks at five in the morning. Several don’t come back in until the nine o’clock deadline. They know who isn’t catching fish by the wake left in the water as an angler is moving across the bays to a different area. Some days an angler may cover a lot of the lake-others they may stay in one spot for the whole day. Fish are still reported to be in the deeper water-220-260’. Jigging or casting out and jigging back produces the best results. A total of 3,570 lake trout entered during the eighth weekend brings the event total to 25,533. The 2010 Spring Event which is the largest in the history of Mack Days had a total of 24,339 after eight weeks and the 2011 Event total of eight weeks was 18,895.

The up and coming talented youth anglers have entered 1,221 lake trout during the event. Leading in the 13-17 category is Tanner Murry-Columbia Falls. Murry and second place angler Connor Kowalski-Florence has been trading places for the past few weeks for the 1st and 2nd spot. Connor has a total of 225 lake trout entries. Garett Beville of Lakeside is third with 119, Kobe Cox-Charlo-89, and Roger Guillory of Kalispell 65. The 12 and under group is lead by Garett Vaughan-Charlo-178. He is followed by Danner Shima-Kalispell-65, Dylan Hodgson-Kalispell-44, Alex Moran-Arlee-30, and Carson McDaniel-Polson-24.

Ryan Shima still holds on to the largest fish category with his 42.5 inch-24.5 pound lake trout entry. Smallest lake trout turned in have been a 165mm (6 ½”) entry from Jason Mahlen and a 166mm entry Jim Riley of Columbia Falls caught on Friday.

Entries will be taken until the last day of the event. Information about the event, tagged fish, prizes, etc. can be found at www.mackdays.com or telephone 406-883-2888 ex. 7294.