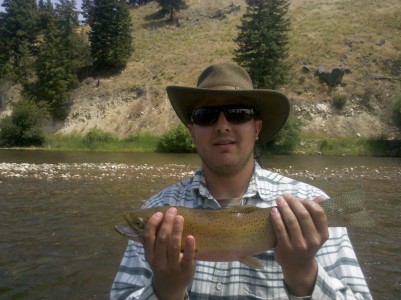 Despite the off color flows the root is fishing fairly well. Subsurface is your best bet with the current conditions. Copper John’s, San Juans, Pheasant tails, and Stone-fly nymphs are getting the job done. If you float the Bitterroot make sure you check conditions prior to going, know where the snags are, and have someone good on the sticks! Every year someone manages to die on the Bitterroot River, so lets try to avoid that this year!

The Blackfoot is still high and off color. However, it has been on the drop for over a week now and could produce some fish. Your best options are going to be big beaded stone-fly nymphs and San Juan worms. You could also move some nice brown trout by throwing streams at the bank.

Rock Creek is the place to be in Western Montana. Here is the report from Rock Creek Mercantile: “To say things have gotten much better on the Creek in the past few days would be an understatement. The streamflow is only slightly above the average now, and the water is looking great. While there hasn’t been a ton of dry fly activity still, the nymphs and streamers have been doing very well. Surprisingly, people have been catching large rainbows of all things, some even in the 20+ inch category. That’s a marked difference from just a few years ago, when it was the brown trout that dominated here. The ‘bows seem to have made a big comeback. At some point, the runoff will shoot up again, but until that happens, it’s going to be productive up here at the Creek.” www.rcmerc.com

Big Water and off color. However, even in the current conditions your can still find some big fish. Skwala’s are still taking fishing on the Clark Fork. However big nymph rigs could be more effective.

The Missouri River is the place to be in Montana. Especially if you are itching to catch fish on dry flies! March Browns are out in force on the Missouri and the fish are eagerly rising! Nymphing will produce fish all day but who can pass up spring fishing with dry flies? Again, The MISSOURI IS HOT RIGHT NOW!