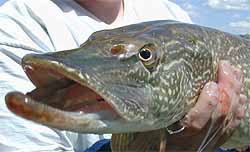 Well we’re back from Fort Peck and it was a blast! Crooked Creek is pretty nice and very few folks were out there. During the week there were only about 4 campers, over the weekend about 8. Anyways, I wound up running to the start of the Narrows just east of Fourchette bay and WOW! Really Fat Smallmouths all over the rock points, every fish was between 14 to 16 inches. I even broke out my flyrod for these fish, which actually caught my biggest fish at 16 1/2″. Also had a ball with Northerns, they were really starting to stack up in the back of brushy coves. Getting ready to spawn.  Most of the northerns were 24″ to 32″. I also started using the flyrod on them (What a blast).

Used Crawfish bomber cranks and Tube jigs for the Bass with the Tube doing the best. As for the Pike it was our soft Jerk the “Thing”. Those Pike would come clear out of the water for it, lots of top water action.

I didn’t even try for walleyes, but there was some folks there using bottom bouncers and fishing about the 1/2 way area between C.C. and Fourchette and caught walleyes, catfish and crappie (Nothing really big). The C.C. area is really a lot shallower than the rest of the lake, deepest I recorded was only 22′.

There’s no power or water hook ups at Crooked Creek, but does have a water pump for filling jugs and stuff. Had to take our own fuel with us to keep fishing. Also Bob’s in Winnett isn’t selling bait or tackle anymore so you’d need to get minnows and such before.

Anyway we’re back home and will be attacking the walleyes down here now.

Anyone coming by say Hi, we have some new proto type jigs I need you guys to try.

Also anyone heard about the newest coolest lure being used back in the eastern southern states, the “Alabama Rig”. Well I produced our version of it (Woody’s Brell’a Rig)and we’ll be sending these to customers in those states where it’s needed. It’s evidently something else and the one we’re building should be an even better model than the original.

Ok, I’m done you guys be good and Later,