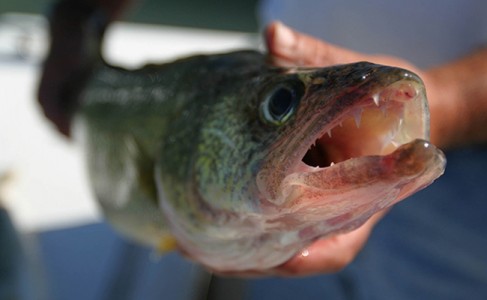 Day One for the 2012 Canyon Ferry Walleye Festival is how history. Wow, what a difference from last year. The bite was on for most people this year. Water conditions were great at the south end so it got a fair amount of pressure, but teams were pretty well scattered out from the south end up to the White Earth and Goose Bay areas. Nice fish were caught going south as well as north.

The Team of Dan Spence and Tianna Workman are leading the tournament with 5 fish and a day weight of 30.82 pounds. They also had biggest walleye of the day, a huge 15.08 pound fish that netted them some $1420 for the biggest walleye.

In 2nd place is the Team of Kit and Trevor Johnson – one of the MT Walleye Circuit sponsors from Kit’s Tackle — with 5 fish and 21.80 pounds.

Third place is the team of Ken Schmidt of Glasgow and Mark Jones from Billings with 5 fish and 17.47 pounds.

Fourth place is Dan Kroll of Helena and John Willoughby from Colestrip with 5 fish and 15.70 pounds.

Rounding out the top 5 is the team of Patrick Slater from Powell, WY and Sam Cotterell from Bozeman with 5 fish and 15.16 pounds.

Overall 48 teams weighed in 5 fish on day one — a significant improvement from the past couple of years and last year where 15.91 pounds won the two day tourament.

A total of 462 fish were weighed and a total of 743.3 pounds or an average of 1.6 pounds. Amazing considering the past few years.

So, what has happened — was it because of the nice warm stable weather the past few days that really turned the fish on and water conditions being so much better? Was it because of the change in limits for Canyon Ferry that now only allow the harvest of 10 fish per day with only 4 of those over 16″ and only one of those can be over 28″? Or more than likely, a combination of things that have happened over the past couple of years. Either way it is really nice to see some better fish being caught. Yet there still were 19 teams with zero fish the first day — one or two of those had issues and didn’t make it out on the water.

Of the 462 walleyes weighed — 114 were over 16″ — so maybe there is some hope for Canyon Ferry being a place you might want have a great walleye fishing trip.

Gordy and Tanya Matson from Ennis are currently leading the Angler of the Year race and are sitting pretty good right now after Day One at Canyon Ferry — it will be interesting to see what happens tomorrow.