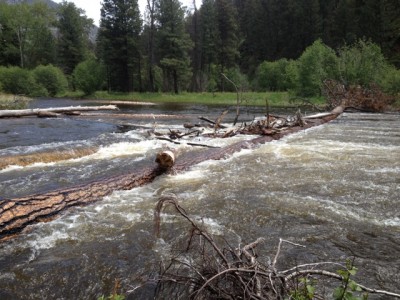 Fishing reports are coming in from all over the state. Most are from lakes but the river fishing seems to be improving too! The famous salmon fly hatch is on at Rock Creek east of Missoula, at least when the sun decides to come out which has not been very seldom as of late. The folks at Rock Creek Mercantile www.rcmerc.com had this to say about the salmon flies in their Monday fishing report: “Salmon flies continue to do very well on the lower stretches. I caught a couple nice rainbows yesterday on the “Cat Puke”, and that, along with a few other specific patterns have been producing really well. There is a light-colored drake out, and flies that imitate it have been catching fish too. Up high, while you can still try salmon flies, the actual hatch hasn’t reached there yet, so have some nymphs and streamers ready in case they aren’t keyed into the big bugs.

Yesterday, I went up the Creek to get some photos of the new log jam that is at 27 mile, just above the old “War Zone” jam and below the Upper Fire ring put-in. When the water was lower, some people were able to pull onto the gravel bar in the middle of the creek and pull their boats over a smooth section of the log, but as the water level increases, that’s becoming a less and less viable option. Overall, I’d recommend avoiding this area if you are doing a float.

The one other thing to note is that just above this area, the river forks out. Some are choosing to stay left since it looks like you can avoid a lot of what you see in the pictures below, but I’ve received reports that there is a log in that left channel that can be hazardous as well. I couldn’t get images of that, so what I would do is get in touch with floaters and guides who have done this stretch before and pick their brains about how to deal with this area of river”. One Outfitter you can call is John Perry 406-370-9183. For daily updated information on the river conditions as well as the fishing conditions contact Rock Creek Fisherman’s Mercantile 406-825-6440.

The king salmon bite is going strong on the Clearwater River in Orofino, Idaho. Bill Brown from Bob Wards in Missoula has been fishing in Idaho. See Brown at the store and he can get you geared up and tell you how to fish for the big king salmon.

The walleyes are starting to bite on Holter Reservoir and the trout fishing has also been excellent. The Canyon Ferry walleye bite is hit and miss for anglers I have spoken too.

Two walleye tournaments were held last weekend-one on Fresno Reservoir and the other on Fort Peck Reservoir. Lucky Bethel and Bob Sherer caught 22.42 pounds of walleyes to win Fresno. Kris Keller and Charlie Redfield from Wolf Point caught 58.52 pound of walleye to win the Rock Creek Tourney. 92 two person teams competed at Fresno and 54two person teams were in the Rock Creek tourney.