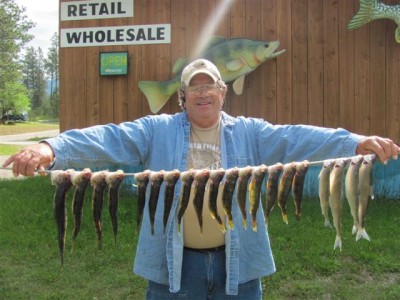 June 8th I spent the afternoon with 2 other fishermen on Flathead searching for some deep water lake trout.  Recent reports of folks doing well in Skidoo Bay took us there for several hours with limited success fishing in depths from 220 to 290 feet.  Though the fishing was picking up as the afternoon wore on, I asked my partners, Bob and James if they wanted to spend the rest of the day where we were or to try another place.  James was non-committal but Bob opted for the ridge off the North Point of Bird Island.  With only a limited amount of time before dark we headed over there.

Anchoring up near a depth of 230 feet using both 2 oz and 1 ¼ oz Glo Grubs in chartreuse Glow and natural glow colors and using a glow fly above them we had steady fishing up until dark.  Our 52 quart cooler was near full when it became evident that we had to leave if we were to get to the Finley Point State Park Landing before dark.

Take note that these deep water lake trout because they feed on shrimp are excellent eating as opposed to the shallow water lake trout in a 10 to 60 foot depth which feed primarily on other fish.

The kokanee in Lake Mary Ronan continue to feed actively.

Ray Thieler of Polson reports that in the early morning the fish are suspended making trolling the best approach until about 10:00 a.m. when the fish sound and can then be caught jigging with a glow hook below an attractor with or without another glow hook above the attractor. Corn scented with shrimp oil for chum with a piece of shrimp itself for bait is a recipe for success in a depth around 25 feet.  If after you’ve caught a limit of salmon you still have fishing time Ray suggests fishing night crawler below a bobber next to lily pads for a chance at some fillet sized perch.

The bait fish fishing near the Polson Armed Forces Memorial Bridge has picked up with suckers and pike minnows (sq. fish) being predominate but mountain white, lake trout, and cutthroat trout are also available.  If you wish to sell your baitfish you can pick up a commercial rod and reel license at Zimmer Tackle.  You can also pick up the hook and weight set ups, maggots and corn for chum here.

There is the possibility of a lake whitefish bite this year.  Usually the bite begins during the 3rd week of July, and will run through early September.  It all depends on how prolific are the perch fry that initiates this feeding frenzy.  Conditions look good but we’ll still have to wait and see.

The 11th of June a bait fishing expedition turned into some decent perch fishing. (See picture.)

The largest in this stringer is a solid 13”jumbo.  Years ago a powerful North wind drove ice into the west running leg of the then “L” shaped City Docks toppling it and driving it shoreward.  This created a fishermen ornery reef.  These perch were on and just to the inside of this structure.  They responded to a night crawler above a bottom weight.  The whitefish also in the picture were taken on maggots in the waters on the west end of the Armed Forces Memorial Bridge.  A catch and release fly fisherman could have some fun trying for the cutthroat trout that were rising in abundance there.

For more information contact us at 406-675-0068 or email us at: macman@ronan.net. Check out our website at www.zimmertackle.com for product available to order on line.
We’re always interested in any fishing stories or pictures you’d like to send our way.
Good fishing,
The Macman