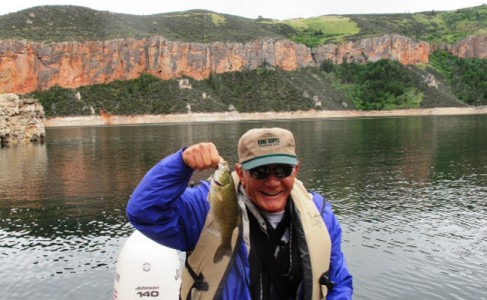 I had the opportunity to fish the Bighorn Reservoir with Gary Ziegler on Saturday. He’s a member of The Bass Federation, which was taking a group of National Guard soldiers fishing as a thank you for their service. Gary was tossing a grub while I was jigging a dropshot setup. I caught more fish, but he caught bigger fish. All told, most of the eight boats brought back a limit of five fish. The largest were nearly 2 pounds. We also saw a black bear sow and its two cubs walking along the bank, that was a good photo to catch. As long as the cool weather persists, bass fishing should remain good at Bighorn Reservoir. Once the water warms, though, the bass fishing will slow down until the fall. Anglers casting for bass also have the chance to catch walleye, catfish, trout and the occasional carp to spice things up.

Follow this link to read the full story – http://billingsgazette.com/lifestyles/recreation/reservoir-on-montana-wyoming-border-lures-smallmouth-anglers/article_79657868-31af-54f2-a0a0-bb1987276ace.html