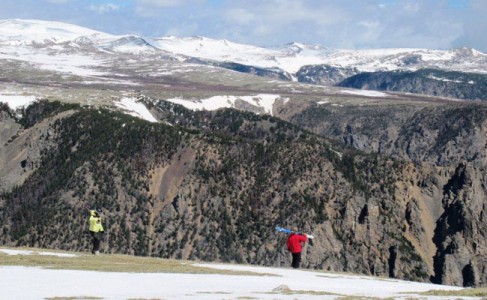 Just because the lifts stop turning doesn’t mean skiers and snowboarders have to stop riding. The Beartooth Pass south of Red Lodge offers some fairly-easy-to-access snowfields that sometimes survive into July. The runs are probably on a par with some ski area’s black diamond runs, though, so these routes aren’t for the inexperienced. I got to check out the Rock Creek Headwall last Friday. After a mile walk across the plateau, it was a rush to ski down from the chute, which sits at more than 9,000 feet in elevation.

It was a good week because the day before I got to go carp shooting with Ann Feragen, a Billings archer. We visited the south end of Tongue River Reservoir where the carp could be found spawning in grass flats. They provided plenty of opportunities for Ann to hone her archery skills in this season between turkeys and elk.