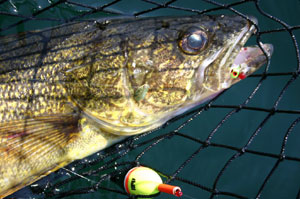 The finale day for the 2012 Tiber Walleye Tourney was a much tougher day for several teams with high, gusty winds that made boat control and fishing pretty tough.  Yet as usual some teams made some adjustments and did fairly well.

1st place and top honors went to Ray Cole and Steve Thomas of Great Falls who weighed in another 12.12 pounds on day two for a total of 27.52 pounds.

2nd place went to Allan Jackson and Matt Zeadow of Townsend weighing 10.96 pounds on day two for a total of 26.88 pounds.

3rd place went to Kerry Parsons and Doug Rohlf of Great Falls weighing 12.22 pounds on day two for a total of 26.6 pounds.

Rounding out the top 5 was the team of Gordon and Tanya Matson of Ennis with a total of 25.50 pounds.

Top weight on day two went to Darren Raney and Jim Brown of Livingston with 12.56 pounds.

Largest walleye on day two was a 4.42 # 23” fish and a tie with 3 teams each splitting 1/3 of the day pot – Dick Wunderlich and Ken Druyvestein, Robert and Terri Mills, and Ron Groseclose and Mike Mclean.

Overall the largest walleye of the tournament was a 7.58 pound fish caught on day one by Randy Snyder and Ron Clausnitzer of Lewistown.  This netted them a check for $250 for the Fenwick Largest Walleye Award as well as a selection of Mack’s Lure products.

Cool Under Pressure Award went to the team of Darren Raney and Jim Brown who advanced the most places from day one and won a set of trailer tires from A-Z tires.

The Dinosaur Award went to Terry and Paul Druyvestein with 2 -$25 gift cards, hats and t-shirts from Scheels Sports in Billings, MT.

The Hardest Charger Award went to the team of Jeff Shamley and Mike Reed with 2-$100 gift cards from Scheels Sports in Great Falls.  This award goes to a team that had zero weight the first day and does the best on day two.  They weighed in 7.96 pounds on day two to claim the prize.

The Top Ranger Team was Brian Olson from Havre and Dan Chovanak from Helena winning a $500 Ranger certificate.

Top Lund Team was awarded to Ray Cole and Steve Thomas netting them another $500 check from Townsend Marine and Lund.  They also received a Townsend Marine certificate worth $500 towards a qualifying purchase.

Top GMC Tow Vehicle Award went again to the team of Ray Cole and Steve Thomas of Great Falls with another $500 check from Rimrock GMC/Cadillac in Billings.

Top Adult/Child honors and a check for $100 from Bob and Patti Hickey and 2 nice rod/reel combo, hats, and t-shirts from Scheels Sports in Billings went to the team of Mike and Ryan Green of Great Falls.

2nd place Adult/Child team and a $50 check from River Techniques/Luckie Bethel went to the team of Terry and Cody Eisenbarth from Great Falls.

In addition to the final cash payout for the tournament of $3000 Ray Cole and Steve Thomas also ended up as the top team winning a Navionics voucher for a $200 map card, 2 – Mack’s Lure Gift Cards worth $50 each, and the Townsend Marine Certificate worth $500 towards a qualifying purchase of $10000.

Overall, even with only 89 teams signed up this year for the tournament the top team ended up with almost $5000 in cash and prizes for their efforts from Day money payouts, final payout and the additional circuit awards.

Also we ended up drawing for the Lowrance and Minn Kota raffle Saturday evening during the awards ceremony since we sold the rest of the tickets.  The lucky winners will be notified by phone on Monday – I am having a little difficulty in reading the names — a Clarence K. from Billings won the Lowrance HDS , 8 with Insight USA maps and a Shannon C. from Absorkee won the Minn Kota Terrova with i-Pilot.

Congratulations to everyone. And thanks to all the sponsors and volunteers that made the 2012 Tiber Walleye Tourney happen.  Please show your support to both the local and the tournament sponsors.