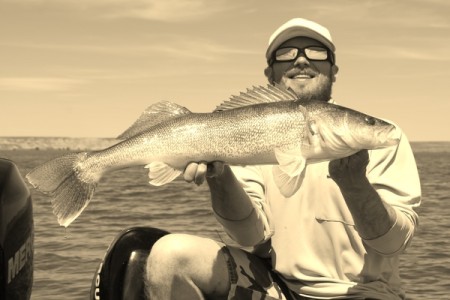 Tiber Walleye Tourney Day One Results are in and it is one of the best days we have seen for Tiber for a lot of years.  The tournament ended up with 89 teams on the water on day one.  Almost 20 pounds of fish was what it took to snag the lead during the heated competition.

The water levels and temps are close to normal for this time of the year.  Fish are being caught with a variety of methods – from jigs, to rigs, to cranks and from one end of the reservoir to the other.  And fish are being caught shallow and deep.  So most anglers are fishing their favorite presentations and doing OK.

Dan Chovanak from Helena and Brian Olson from Havre are leading the tournament after day one with a total of 16.72 #’s.  They are making a strong run for a win which will net them the Ranger cash incentive award of $500 plus a $500 Ranger wear certificate along with top team payouts, etc.  So it will be really interesting to see how they make out tomorrow.

Gordy and Tanya Matson are in 2nd place with 16.06 #’’s and also weighed in the largest northern of the day at 11.15#.s  They are making a good run at another great finish and Top Lund and Mixed Couple awards.

Third place is held by the team of Allan Jackson and Matt Zeadow of Townsend with 15.92#’s.  They are in the lead for Top GMC/Cadillac $500 cash incentive award.

And rounding out the top five is the team of Ray Cole and Steve Thomas from Great Falls with 15.40 #’s.

Day money was paid out to the top 18 teams along with Biggest Northern and Biggest Walleye.  The largest walleye on Day One was a 7.58 # fish caught by Randy Snyder and Ron Clausnitzer of Lewistown.

Overall, a lot of fish were caught and only 8 teams had a zero weight on Day One.

Day two will be interesting. Some of the top teams will probably struggle, and others who had a tough day on day one will make some adjustments and probably have a great day.

Day two money will again be paid to the top 18 teams.

Flights are due in tomorrow at 2:00, 2:15, and 2:30 PM hopefully  before we see some the higher winds that are forecast for tomorrow afternoon.

Next stop on the Montana Walleye Circuit is Canyon Ferry Walleye Festival – next weekend.

Final results and payouts will be made available later tomorrow or Monday when I get better email/internet access.