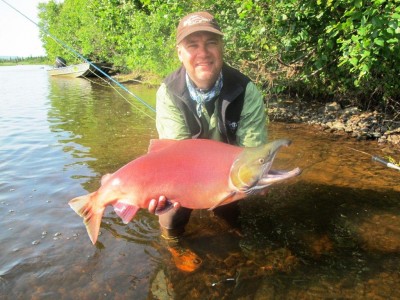 This is one of the large male sockeye salmon that I caught while fishing with my cousin, Mark Johnson, in Alaska last week. He is known in the Alaska Trophy Fishing Safaris camp as the “sockeye slayer.” The guy hooks a lot of sockeye, the limit for which is five a day. The key is getting the fly down quickly, so we used a lead-core leader as well as twist on weights on our heavy-duty fly line leaders. You cast quartering upstream, do a two count, then strip the line. I watched my cousin, he seems to have a keen sense of when the line bumps into the sockeye. Since the sockeye aren’t eating, you have to snag them. We only kept those we snagged in the mouth. As wide as the fish are, they get sideways in the current and feel huge. They are strong fish and will often jump, sometimes repeatedly and sometimes right toward you. I have to say they are one of the funnest fishes I have ever caught, and the most tiring to reel in.

Be sure to tune in Saturday Morning from 6:00 to 8:00 a.m. for the Montana Outdoor Radio Show.

This post was provided by Brett French, Outdoors Editor for the Billings Gazette