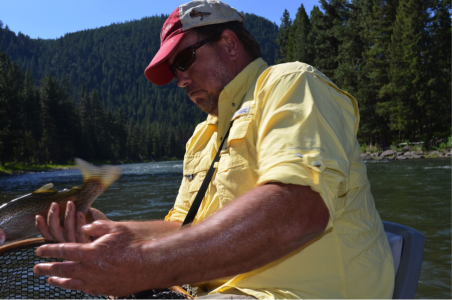 It has been a busy past two weeks and right now is a great time for Montana Fly Fishing.  I have been form one of the state to the other with clients! From the Blackfoot to the Missouri to the Bitterroot to the Clark Fork (upper and lower) to the Thompson back to the Blackfoot! 1700 miles later and a lot of fish landed I have finally found the time to sit down and tell you about the fly fishing across the state of Montana.

THE MISSOURI: I will start off with the Missouri River! It was hands down the best fly fishing I have ever seen! I have fished all over the world and Missouri River located in Craig Montana was lights out. PMD’s, caddis, yellow sallies were the patterns of choice. Cabot with a nice 22 inch rainbow trout on the Missouri River. 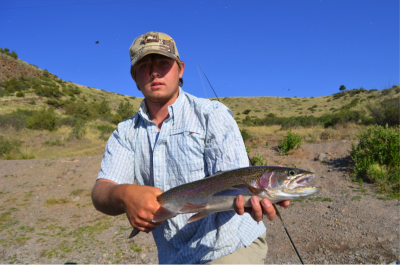 “Me with a 21 inch rainbow.  This is what happens when you teach the clients to cast!” 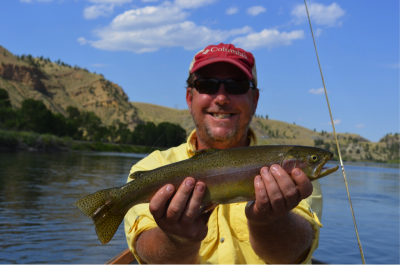 Mike and Cabot the father and son team lost many fish because the fish were just too big and broke the line.” 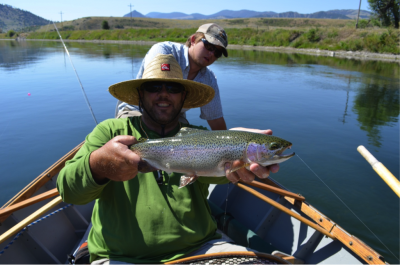 “Mike with a nice 19 inch rainbow.  He figured out the cast and got this one in without breaking the line.”

The Blackfoot River east of Missoula was hit and miss fly fishing.  We started around 7:00am to get a on the river before anyone else.  The fish were taking pmd’s, yellow sallies, green drakes, some salmon flies, caddis, and streamers.   Here is Mike with a nice cutbow.  Photo titled “THE ONE THAT GOT AWAY”. 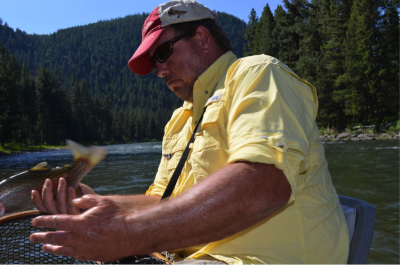 The Bitterroot River South of Missoula was productive, but no big fish to brag about.  Over 40 fish caught just about every day I was on the water.  The entire river fished well from Hannaon to Florence.  Fish were taking the dry flies well.  We saw some big fish go after the fly, but the clients could not set the hook fast enough to get the big boys.

The Clark Fork was a bit off, but should come into play any day.  I had the opportunity to do a Float with the best boat builder in Montana.  Stu Williams with Montana Boat took his latest wooden boat that he built this spring out on the water.  This wooden boat was a piece of work.  Stu has built over 101 wooden boats of the years and has no intentions of retiring.   Stu also builds a great raft trailer.  We took a father and son for a fun float in our wooden boats to watch the sun set and hook a few fish. 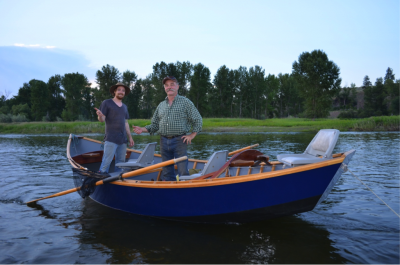 “WOW what a looker, the boat that is!”

Montana Fishing Company offers the best guided fishing trips in the state. We guide on the waters in Missoula, Bozeman, and the Missouri river. If you have Family coming to town and want to treat them to a guided fly fishing or spin fishing trip please contact Scott Anderson Owner/Outfitter 406-210-0971.