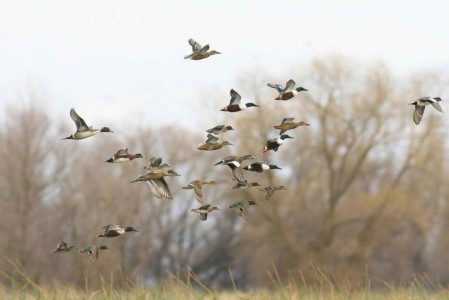 It is looking good this fall and winter for Montana duck hunting season this year! Last year was a record number of Duck population and this year has broken that record again. The U.S. Fish and Wildlife Services’s annual spring survey was recently released and reported that this years population of ten primary species of ducks was 48.6 million. That is a seven percent increase from last years.

Here is what Fish Wildlife and Parks has to say:

“The exceptionally wet year in 2011 and that year’s good production resulted in strong returning duck populations,” said Jim Hansen, the Central Flyway coordinator for Montana Fish, Wildlife & Parks in Billings.  “Although many areas have had very hot, dry weather in 2012, late spring precipitation in parts of Prairie Canada have improved prospects for 2012 duck production.”

. . . On the habitat front, overall the count of 5.5 million ponds in Prairie Canada and the U.S. was 32 percent below last year’s estimate and 9 percent above the long term average, marking the first time since 2008 that ponds dropped below 6 million.

Hansen surmised that the loss of wetlands and nesting cover will affect duck populations over the next few years.  With more Conservation Reserve Program contracts expiring there will be less nesting cover, and high commodity prices tend to push conversion of grasslands to cropland.

“The fall flight of ducks looks promising, but hunting success, as always, will be influenced by the weather and by local habitat conditions,” Hansen said.

For online information on the federal duck and wetland report, visit flyways.us.