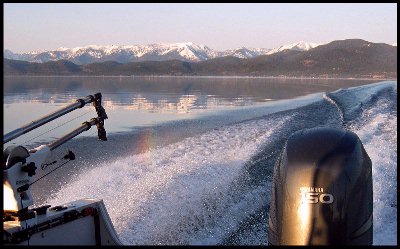 Whitefish …. not this year, maybe not for a few more years! – Flathead Lake Fishing Report
By Kelsey

I’m afraid that if the whitefish were going to bite it would have already started and that just isn’t the case.  I’ll give you my take on why it will probably be at least 3 or 4 more years until there are enough perch fry to initiate the feeding frenzy we all look forward to:

Yesterday, July 23, Don Larson (originally from Thompson Falls now from Seeley Lake and Polson in the summer and a yacht somewhere near the Central American coast in the winter) and I fished the end of a deep water ridge that is directly East of Mulligan Bay.  260 to 275 feet was the most productive depths.  We had a constant bite for about 3 hurs at which point Don decided we had enough Lake Trout.  He and his significant other, Rosie, had made a pact that they wouldn’t keep anymore fish than they could eat.

I thought this admirable and though it’s tough to quit when the fish are biting I had enough of a fishing fix to last a couple of days.

Most of the fish had bright orange, near red flesh which make them excellent table fare.  Their stomachs were stuffed with shrimp which accounts for their excellent condition.

There are some sizeable perch being caught around the old Polson city docks on night crawlers.

The Mac attack Lake Trout and Whitefish tournament will be a little later this year, the 25th and 26th of August.  The entry fee will again be 25.00 per person. We’ll have entry blanks here at the Zimmer Tackle store.  As well as contest rules. It will be headquartered at Linda Vista in Somers.