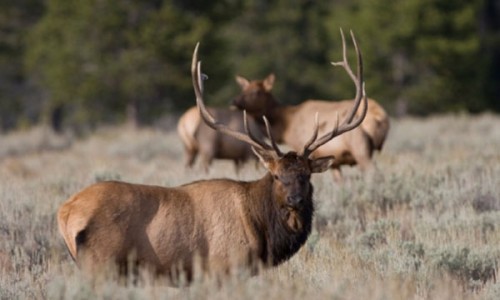 Calling in the Bulls: Captain’s Column
By Matt Schauer

This is the time of the hunting season that archery hunters look forward to all year long. The elk rut should be in full swing and the bull elk should be bugling. When this happens your chances of getting a bull within 30-35 yards increases dramatically, as some successful archery hunters have already experienced. And as they know, the closer the animal, the better the opportunity.

Shawn Plakke, from Superior, has guided elk hunts and also taken some nice bulls himself with a bow. Plakke also provides an elk hunting tip of the week on the Montana Outdoor Radio Show.

Last Saturday, Plakke had some great advice on trying to get closer to a bull elk this time of year.

“Hunters I have been talking to are using a cow call to get the attention of the bull and it is working,” Plakke said.  “But then after the bull responds, they set up and automatically they expect the bull is going to come charging in from 160 yards out and it’s not happening.”

Working your way toward the bull is the next step recommended from Plakke. “They need to work as close as they can get to that bull and then set up and try and locate where the bull is and try to close the gap a little more,” he said. Some hunters are getting the attention of the bulls, but they can’t get them to come closer because the bull is already cowed up.

The challenge is to get that bull into a comfort zone, so you can make him think that he can sweep around where you are located and bring another cow back into his harem.

“You accomplish this by going toward the bull and cow talking real soft, remember the bull is expecting to see a cow and the cow you are sounding like wants to be with his other cows too!” As you get closer to the bull, stop every few yards to set up and get ready for a shot. “Sooner or later the bull is going to lift his head up and try and get closer to the cow, so you have to be ready at anytime to take a shot if the situation presents itself,” Plakke said.

Hunters might also try using a light-weight silhouette cow elk decoy, that they can easily carry with them and quickly put up.

“That bull is expecting to see a cow so decoys can be very effective,” Plakke added. “But be careful not to be fumbling with the decoy because then it can be more of a liability then an asset for you.” Decoys work well set-up by a watering hole, the bull is more likely to feel comfortable coming closer if he can see other elk. “I have gone as far as splashing in the water after set up a cow elk decoy and a big bull came right to the watering hole.”

Some good advice for archery hunters.