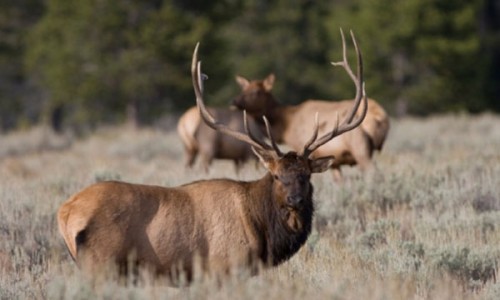 Drunk Elk Gets Stuck In Tree
By Kamp Cook

Humans are not the only critters on earth that like to get drunk and belligerent. Turns out elk are no strangers to the “sauce.” Apple sauce, that is. Last year a Swedish news website, The Local, reported on an elk that was found stuck in a apple tree after chowing down on fermented apples. Which caused to the elk to get drunk.

According to the Local

I thought at first that someone was having a laugh. Then I went over to take a look and spotted an elk stuck in an apple tree with only one leg left on the ground.

I thought it looked pretty bad so I called the police who sent out an on-call hunter. But while we were waiting, the neighbors and I started to saw down some of the branches and then the hunter arrived with a saw as well.

The elk passed out like any hammered person would but minus the half eaten burrito. The Fire Department showed up and cut branches loose in order to free the elk. It apparently remained passed out in the yard until early the next day when it stumbled off doing what would be the elk version of “the walk of shame.”