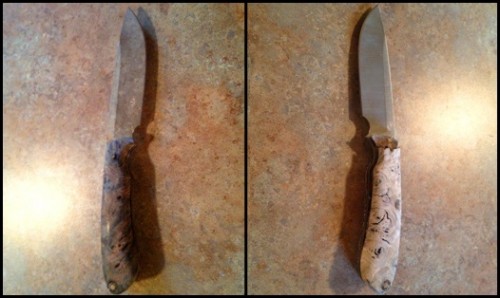 LOST AND FOUND SERIES – PART 1: The Knife
By angelamontana

In 2011, I was elk hunting in the Bitterroot.  I had a pack with me, but I still carried my custom hunting knife in a sheath in the cargo pocket of my pants.  Unfortunately, this pocket was not very secure, as I had to pick up my knife off the ground a handful of times after realizing the pocket wasn’t deep enough to hold it.   I had been aware of this, but I failed to remedy the issue and realized my knife was gone one evening when I was unpacking my things in our wall tent at, what we called, “Wolf Camp 2011”.  Although the knife itself wasn’t handed down to me as a family heirloom or anything like that, at the same time, it was my first and only real hunting knife, AND it was custom-made by a generous former co-worker.  Also, without it, there could be a problem if I tagged something and was by myself.

Fast forward to opening day of rifle season, 2012.  My hunting buddy, Jason, and I drove to a spot we know quite well and have spent many hours hiking over the years, including the year before at Wolf Camp 2011.  As we were turning around, Jason stopped and said, “you aren’t gonna believe this”. He started laughing, opened his door and said, “ I just found your knife”.  I had no idea what he was talking about, as I had all my knives (in my pack, of course–not in my pocket).

Then he held it up in front of me, and I almost fell over—it was my custom knife–the knife I had lost an entire year before then.  It was right there on the ground, in the middle of the road.  The blade was just as sharp as it was before, it only needed a new handle!

I may not have started opening rifle season with a kill, but I was not disappointed with what I did get!

Submit your hunting lost and found stories to The Montana Outdoor Radio Show!

Visit www.montanaoutdoor.com next week for Part 2 of the Lost and Found Series!