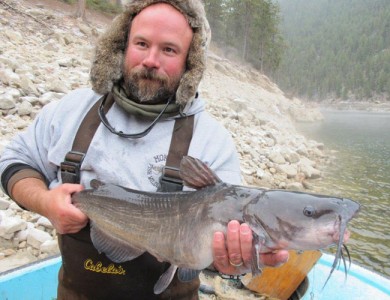 Montana Fish, Wildlife and Parks has been working the past two years to build up the native sauger population in Bighorn Reservoir. The fish have been found to be genetically pure, as well as a unique strain. But spawning operations have suffered some setbacks.

Last year the water was too high for crews working to capture fish in the Bighorn River in Wyoming to milk their eggs. This spring the water temperature spiked and essentially cooked the eggs inside the fish before they were pulled by fisheries biologists.

As a result, FWP is behind where it had hoped to be with its six-year project. The agency had planned to plant fish for three years and then study how they were doing for three years.

In conjunction with the sauger stocking efforts, FWP has quit planting fertile walleye in Bighorn Reservoir and gone to triploid, or sterile, walleye only. Walleye anglers are complaining the fishing isn’t as good as it used to be, although the fish that are in the reservoir seem to be benefitting from large populations of emerald shiners.

Looking ahead to Sunday, I have a story on the forecast for low water at Fort Peck Reservoir next spring that has the potential to leave Crooked Creek Marina and the Nelson Creek Recreation Area boat launches dry. Current forecasts from the U.S. Army Corps of Engineers is calling for a drop of the reservoir to an elevation of 2,222 feet by March 1. The reservoir is suffering from reduced inflows via the Missouri River, and the National Weather Service is calling for a drier and warmer than normal winter.

For more on the stories, see The Billings Gazette’s website.