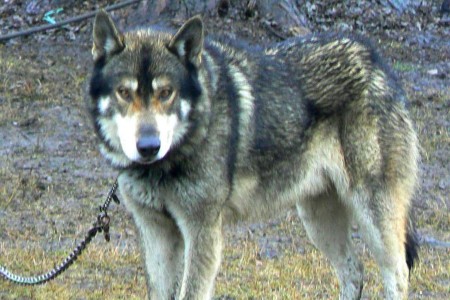 With the wolf population in some states increasing even as hunters are harvesting wolves, some people believe that it is “cool” to have wolves or wolf hybrids as pets.  The fact is that they are dangerous animals and should not be mistaken for a domesticated animal, regardless of how cute they are as puppies and how beautiful they are as adults.

See the response posted by the US Fish and Wildlife Service on their “Questions and Answers about Gray Wolf Biology” page, on their website, below:

No, wolves or wolf-dog hybrids do not make good pets.  The idea of owning a wolf or a wolf-dog cross is appealing to many people, but the reality of owning one of these animals is often very different. While wolf puppies might be as cute as dog puppies, they will grow up to be wolves, not dogs, no matter how much they are treated like dogs. With wolf-dog crosses, or hybrids, the higher the percentage of wolf genes, the more wolf-like behavior the hybrid will exhibit.  There is no way of knowing the percentage of wolf genes in a cross that is an offspring of a hybrid.

Many an unsuspecting wolf lover has purchased a wolf pup, only to find that it is largely untrainable, because it does not care much about pleasing its owner.  As it grows into adulthood it becomes unpredictable, if not downright dangerous, especially around children and small animals. Such animals often live miserable lives on the end of a chain after a frustrated owner gives up on attempting to train the animal.  Wolf or hybrid owners who are unable to cope with their “pet” may elect to either pass the animal along to another unsuspecting wolf lover or sentence the animal to life at a sanctuary (many such facilities exist, but most are already overcrowded).  Some may release the animal to the wild, where it will most likely starve to death or because of its familiarity with people, be involved in depredation incidents resulting in wild wolves being unfairly blamed.  Releasing wolf-dog hybrids is prohibited in some states.

For more information on the subject of wolves, visit the US Fish and Wildlife Service website at http://www.fws.gov/midwest/wolf/aboutwolves/wolfbiology.htm.