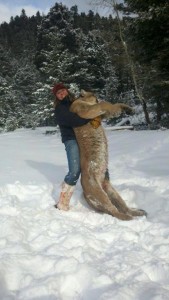 Missoula brewery, Big Sky brewing, recently posted a picture on their Facebook fan page of a female employee posing for her successful mountain lion hunt. The reaction from fans of the brewery were not what they would have expected. With a number of people calling for a boycott of the brewery.

posted Dec. 15, more than 90 times, and it had more than 400 “likes” as of Friday afternoon. But not everyone who saw the photo liked it very much. Of about 300 comments on the photo, many expressed dismay at the popular craft brewery’s decision to post the hunting photo on its Facebook page.

“Really Big Sky?” wrote Facebook user Brett Kvo. “Hunting for food is one thing; killing for fun and then parading it on the Internet is another. I think I’ll take my business elsewhere. …”

Facebook user Britt Murphy wrote: “What a sad end to such a noble creatures (sic) life, made even more pathetic w/an empty show of celebration & Total lack of respect for the Spirit of such a Magical King of beasts.”

“New boycott for me … this photo is gross,” Facebook user Laurienne Riley wrote.

Obviously these people upset about the picture are not from around here or do not understand the proud hunting culture of this state. But if you read through the posts, you will find the people who do.

“I love it. Thanks for the great pic,” Facebook user Linzy Cotham wrote. “I am a houndsman and know the work that is involved. It takes a lot of hard work to get something like that. Its not golf or tennis but some of us love it.”

The debate continues on their Facebook page and you can read the full USA Today article.