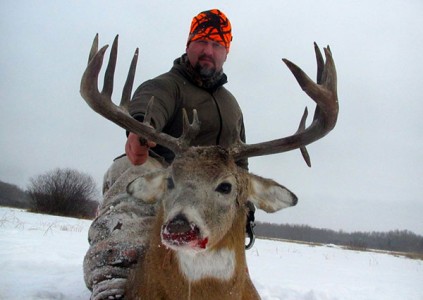 One Man, One Monster – Mike Moran and his 180 Saskatchewan Whitetail
By angelamontana

Michigan native, Mike Moran, snags a monster buck from Saskatchewan that scores 180!  See his story from North American Whitetail below:

That thought passed through the mind of Michigan native Mike Moran as he  passed on what he’d deemed a shootable eight-pointer during a Thanksgiving hunt  in the Saskatchewan wilderness.

With history on his side—he had previously taken a 138-inch 12-pointer, a  159-inch 12-pointer and a 167-inch 16-pointer on past hunts—Moran headed back up  to “the Land of the Giants” to try his luck again with Grant Kuypers of Buck Paradise Outfitters.

His guide, Ty Selk, mentioned two big bucks in the area: “Splits,” named for  his two large, V-shaped split brows, and another elusive buck nicknamed “Kickers,” a chocolate-colored monarch that had been scouted for three years  without a determinable pattern.

“If you had to draw in your mind the ultimate  dream, ‘Kickers’ was the reality of this vision,” Moran said.

Starting four weeks into the season, Moran headed out at 4 a.m. the first day  and was welcomed by a 140-145-class eight-pointer; he was definitely a shooter,  but Moran decided to pass with bigger goals on his mind.

The second day, he said, was uneventful, with one six-point, a spike and  plenty of does, but no trophies.

On the third day—Thanksgiving Day—Moran headed out to the stand in the bitter  cold, with temperatures dropping to -15 degrees Celsius, determined to bring  back a trophy.

“The sacrifice of missing the holiday with my family was also part of the  equation in my obsession,” Moran said.

After passing on yet another good-looking eight-pointer—and wondering again  whether it was a mistake—Moran said a nice, wide buck soon limped into his field  of vision around noon. “Splits,” he thought.

“I raised my weapon, focused on my scope, and I thought, it’s time for  business,” he said. “No time to videotape, no time for pictures, no time for a  profile shot; what would I do when faced with the biggest buck of my life?”

After letting the buck take about four steps, Moran fired a bullet from his Remington 7400 .30-06 right into the buck’s brisket. The  buck didn’t take another step before dropping flat.

With his adrenaline pumping, Moran rushed in to inspect, but was surprised to  discover while this buck indeed had a split brow, he didn’t have two, and he was  much bigger than “Splits”; it was that ghost of a buck, “Kickers.”

“Only in a dream I could write a better tale, but this time it was reality,” Moran said. “Nothing worthwhile or of tremendous value has ever come easy in my  life. This is no exception, but the dream did come true and I am forever  satisfied after hunting since age 14 and 27 years in the field. The time was  now,” he said.

“This buck has it all just like the drawing of the school kid characture buck  and it was mine.”