Tony Jones, a veteran Montana hunter, received a call from his friend a few years ago to go and check out his friend’s bull that he had just gotten.  The interesting part about this bull was that he had, what appeared to be, a canine tooth of a mountain lion pierced through his skull.

The bull must have been bitten through the eye socket and then managed to escape the wrath of the mountain lion, leaving the tooth lodged in the elk’s skull.

Fast forward three years to when Tony was out mountain lion hunting and successfully filled his tag.  After he dropped his cat off at the taxidermist, they pointed out that the lion was missing a canine tooth.  Tony hadn’t even noticed that in the first place, and then he started thinking.  It turns out, he had killed the mountain lion in the same area that his friend had gotten his bull three years before.

Coincidence?  Maybe, but if you ask me, I am convinced the lion’s tooth lodged in the bull’s skull came from this particular lion.  It sure is a small world out there for people and animals! 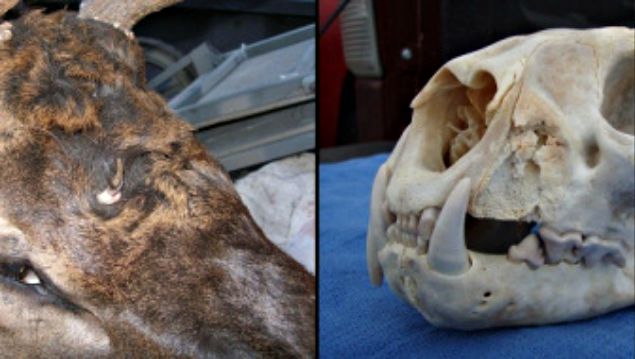