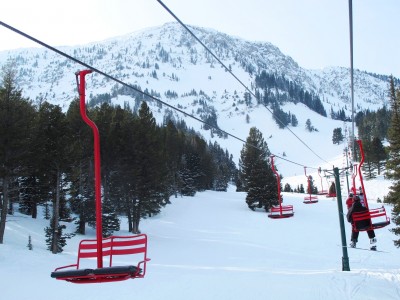 Bridger Bowl ski area, located about 15 miles northeast of Bozeman, announced that it would add two new three-person chairs to replace the current Alpine lift. The chairs would be installed this summer and operating by the opener next season. The current Riblet chair being replaced has been in service since 1967.

The two new lifts, which will more than double skier-hauling capacity, will take off from almost the same place as the Alpine lift, but one will travel to the north end of North Bowl and the other will travel to the southern end of the ski area near Montagne’s Meadow. The south end of the ski hill will eventually be developed to hold more groomed skiing, but that’s not in the board of director’s immediate plans.

Next on the agenda, the mountain’s general manager said, is the creation of a new beginner’s area to the south of the Snowflake lift. The photo shows the current Alpine lift. The new lifts will go to the right and left of Alpine and cost about $4.1 million to install.