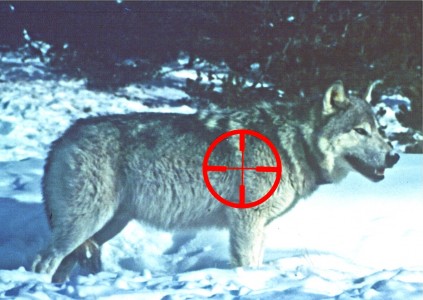 The areas were closed by the Montana Fish, Wildlife & Parks Commission on Dec. 10, in response to concern about the harvest of wolves with collars that supply scientific information to YNP researchers. A temporary restraining order issued earlier this month by a state district judge, however, reopened the seasons with the court questioning whether FWP offered sufficient public notice about the closure. The areas in question are within Wolf Management Unit 390 near Gardiner.

The FWP Commission will meet via conference call on Jan. 29 to reconsider its closure decision.

Commissioners adopted the 2012-13 wolf hunting and trapping seasons in July, after nearly two months of public comment on proposed wolf seasons and harvest limits. In response to that public comment, commissioners further directed FWP to conduct a review of the overall harvest prior to the Dec. 15 opening of the wolf trapping season to determine if season adjustments would be needed. At the time, FWP noted in press releases and on its website that the FWP Commission could close the wolf season at anytime. Montana’s wolf hunting regulations also state that the FWP Commission has the authority to close the wolf season.

The commission conference call is set to begin at 10:30 a.m. on Jan 29. The call will be audio-streamed live on FWP’s website and video-streamed live in each FWP regional office, where public comment can be offered. To comment online, visit FWP’s website at fwp.mt.gov. Click “Hunting“. Comments must be received by 5 p.m., Jan. 25. While online comments are preferred, written comments can be mailed to Montana Fish, Wildlife & Parks, Attn: Wolf Comments, P.O. Box 200701, Helena, MT 59620-0701.

A two-hour hearing on the district court lawsuit challenging the FWP Commission’s decision to close the areas occurred Monday in Livingston. The suit was filed by several sporting groups and a state representative from Park County. A ruling hasn’t yet been issued.

Montana’s wolf hunting and trapping seasons are open through Feb. 28. So far, hunters have taken 104 wolves and trappers have reported taking 48 wolves. More than 653 wolves inhabited Montana at the end of 2011.