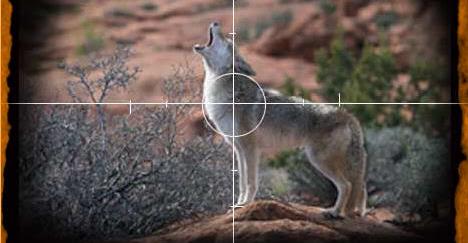 When it is winter in Montana it can mean participating in a number of outdoor activities like snowmobiling, downhill or cross country skiing and of course ice fishing. If you are a hunter, one sport you might have enjoyed is coyote hunting.  This year the folks at the Rocky Mountain Supply, in Dillon, Montana, decided to take coyote hunting to the competitive level, last weekend.  It was marketed as the Dog Days of Winter Coyote Derby.

Tyler Linse who is from Ronan but now goes to college in Dillon and also works at Rocky Mountain Supply was one of the employees who came up with the idea. “We thought it would be a fun way to spend a winter weekend and help manage the coyotes in the area”, said Linse.

It must have caught the attention of a few hunters because 44 teams and 7 individuals registered to compete for cash and prizes.  The cost to enter was $25 for an individual and $40 for a team.  Most of the area landowners embraced the idea according to Linse, “Most of the guys and gals competing had already gained permission from landowners to hunt the land that they hunted on, but we also had some landowners that were customers of the store give hunters permission to hunt during the event”.

The event was a success in terms of number of hunters, but number of coyotes that were entered at the end of the 48 hour hunting period was less than impressive. “We only had 10 coyotes brought in so the hunting was a little more challenging than we expected”, added Linse, “the weather conditions probable affected the hunting as it was windy and warmer than normal”.

Cold and no wind are ideal for coyote hunting, especially if you are trying to call a coyote within range.  The winners were determined by a point system. 10 points for a coyote, 3 points for a fox, and a half a point for a rabbit. The winning team of John Ward and Tater McKay from Dillon brought in 2 coyotes.

In second place was a father-daughter team of Mitch Voss and his daughter Scout.  The Voss’s managed to bag one coyote and 10 rabbits.  The event was the first of its kind in Dillon and it sounds like it will happen again next year, according Linse. “It was a as a successful as we could of imagined so yes we plan on trying to make this an annual event.”

Wolf hunters and trappers in Montana continue to hunt and trap wolves across the state.  Looks like they are making slow progress as of Monday, 186 wolves have been taken.  111 wolves were harvested by hunters, and 75 have been harvested by trappers. The wolf season in Montana ends February 28th.

Anglers, it won’t be long until Spring Mack Days begins again on Flathead Lake.  The Salish and Kootenai Tribe announced that the first day of completion will be Friday, March 15th.  Last year anglers entered 37,928 lake trout in their effort to win part of $150,000 in cash and prizes.