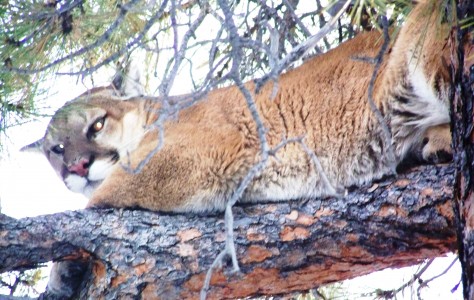 Although cougar chasing has taken on a different definition these days, I took part in the old-fashioned kind last week. What I found out is that it isn’t as easy as it would seem. I tagged along as U.S. Fish and Wildlife Service biologist Doug Powell and houndsman Grover Hedrick tried to find a mountain lion in the Charles M. Russell National Wildlife Refuge. The USFWS is conducting a multi-agency study of cougars on the northern potion of the refuge to learn more about the secretive cats.

We spent all day under perfect conditions – fresh snow and warmer weather – cruising the refuge’s roads in a four-wheel-drive pickup while hoping a cat track crossed that looked fresh. Then Hedrick would release his three redbone and black and tan hounds for a chase. Unfortunately, we never cut a fresh track.

The researchers have, however, collared nine lions so far in the three year study, including one that wandered all the way to southwestern North Dakota – a 230 mile distance by air travel. So you have to figure the cat traveled at least double that distance and along the way crossed the Missouri and Yellowstone rivers as well as Interstate 84. Unfortunately for the researchers, the cat dropped its collar before they could find it, so all of that data on where the cat went during its journey has been lost.